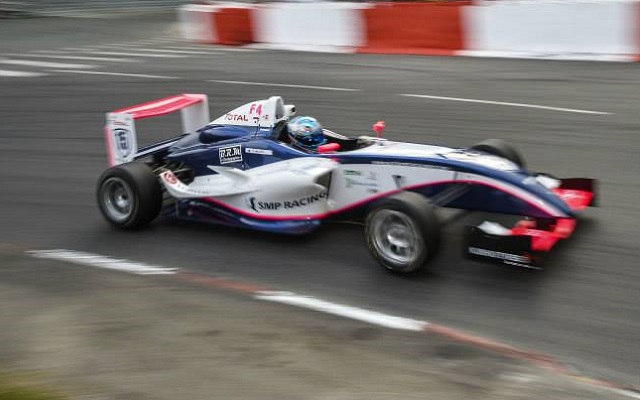 Russian racer Denis Bulatov emerged victorious in the reverse-grid race two of French F4’s fourth round of the season at Magny-Cours.

Having finished race one in ninth, Bulatov started race two on the front row and managed to overtake poleman Erwan Jule midway through the opening lap.

The Russian then controlled the race for the remainder of the distance ad eventually took the checkered flag to celebrate his second victory of the season.

The first half of the event saw a three-way battle for the lead as Bulatov was shadowed by Jule and Valentin Hasse-Clot. Nearing the halfway point of the race, Hasse-Clot passed the poleman and then ramped up the pressure on Bulatov.

However, the Russian withstood the attack, eventually taking the gap to Hasse-Clot back to a second, upon which the Frenchman settled for P2.

Jule eventually couldn’t keep up with the pace of the leaders and slipped back, coming under pressure from Joseph Mawson. The Australian finally took the final podium spot with two laps to go, whilst Jule ended up fourth.

The race was filled with incidents, some of which led to high-profile retirements. Amaury Richard and Gjergj Haxhiu came together on the second lap and ended up retiring, whilst Patricio O’Ward and Dorian Boccolacci were also ruled out early on.

Vladimir Atoev, who started the race in third, ended up nursing a car without a rear wing to twelfth, overtaken by Moineault and Bryan Elpitiya on the final lap.