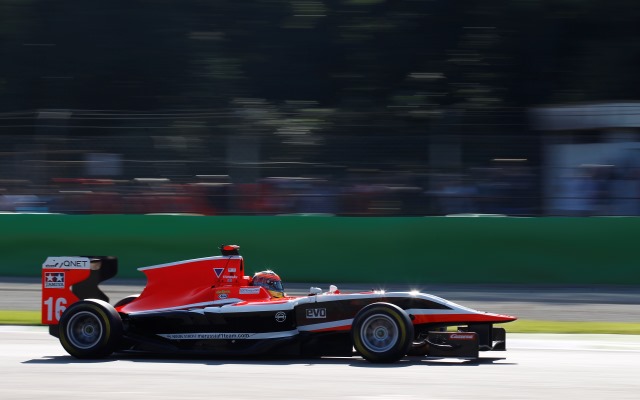 Dean Stoneman scored his third win of the GP3 season, defeating Alex Lynn in an action-packed race two at Monza.

The two Britons got great starts from the second row of the grid to vault into first and second, ahead of front row starters Matheo Tuscher and Patrick Kujala.

Lynn didn’t let Stoneman get away, and at the start of lap four the Red Bull Junior pulled ahead of his Marussia Manor Racing counterpart. Stoneman fought back, reclaiming the lead at the Roggia chicane.

The leaders’ fight brought Emil Bernstorff into the equation, capitalising on Lynn’s compromised line at the chicane to pass his Carlin team-mate Lynn at the first Lesmo. Lynn then retook second into the Parabolica.

That gave Stoneman a bit of a gap, and he kept the lead to take a 0.9 second win.

The front three’s scrap allowed Marvin Kirchhofer to join in the fun and he had a go at passing Bernstorff at the first chicane, but ended up cutting across the inside of the corner. This allowed him to be briefly passed by Kujala, only to retake the position at the Roggia chicane. Kujala was then tagged by Tuscher, causing both to retire.

Kirchhofer caught back up to Bernstorff and forced his 2013 German F3 team-mate into an error at the second Lesmo, allowing the German to get through for his second podium of the weekend.

Nick Yelloly moved up to fifth ahead of his Status team-mate Richie Stanaway, but the latter’s title hopes would take a hit when he slowed and stopped at the Roggia chicane late on. He is now 50 points behind Lynn with two rounds left.

Kevin Ceccon inherited sixth place, while Luis Sa Silva took seventh away from Dino Zamparelli on the last lap. Zamparelli bounced over the kerb at the Roggia chicane trying to reclaim the spot, resulting in him losing the final point to race one winner Jimmy Eriksson, who had slipped back to 14th early on.