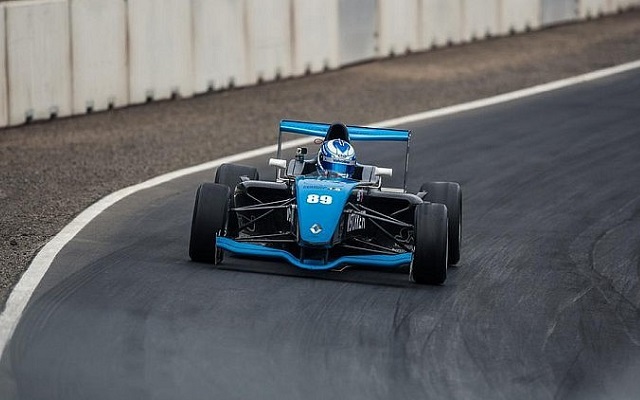 Scuderia Nordica’s Ralf Aron won both races of the Formula Renault 1.6 Nordic round at Solvalla.

Having lined up for the opening race in third, Aron stormed past front row starters Joonas Lappalainen and Oliver Soderstrom, who ran each other wide into turn one.

Soderstrom was then tagged in the back and fell down the order, while championship leader Lappalainen was forced to serve a drive-through for jumping the start.

As such, it was smooth sailing for Aron, who comfortably outlapped the other drivers and pulled clear out front. A mid-race safety car for Karl Ero‘s incident eliminated Aron’s advantage, but the Estonian nailed the restart and immediately re-established a solid gap to eventually take victory.

Norwegian Kevin Aabol took second in the race, which allowed him to move into the runner-up spot in the standings. Two seconds behind him, Robert Svensson rounded out the podium.

Pontus Fredricsson picked up fourth ahead of Ilmari Korpivaara and Lukas Sundahl. Soderstrom recovered to seventh, with Lappalainen, Paul Blomqvist and Robin Fredriksson made up the finishing order.

Having comfortably picked up the fastest lap in race one, Aron started race two from pole and drove a great race to finish 12 seconds clear of anyone else.

Fredricsson moved past Aabol and Svensson on the opening lap to claim second, which he maintained until the checkered flag. Aabol picked up his second podium of the weekend in P3, with Svensson settling for fourth.

Korpivaara and Soderstrom completed the lead-lap finishers as Aron put five drivers a lap down. Blomqvist was top amongst them in seventh, while Lappalainen, Fredriksson, Sundahl and Ero completed the order.

Despite a tough weekend, Lappalainen continues to lead the championship, with a 24-point gap to nearest rival Aabol.