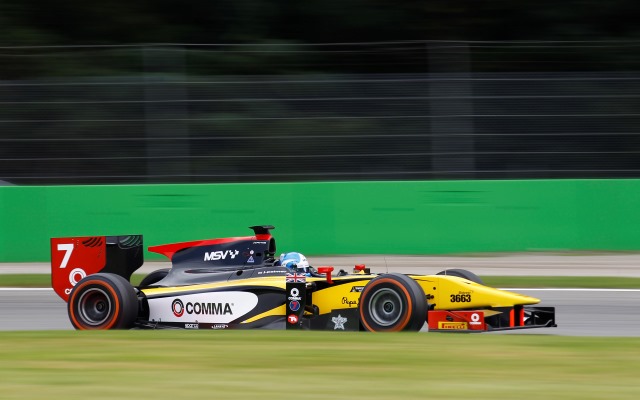 GP2 championship leader Jolyon Palmer claimed his third win of the season in the sprint race at Monza.

The Briton started from pole position, having fought back from a qualifying exclusion to finish eighth in the feature race. He got a decent start, and saw off the challenge of Marco Sorensen by braking later into the first chicane. Sorensen dropped back to third when he cut the second chicane, with Stephane Richelmi moving up into second to make it a DAMS one-two.

After an early safety car period, Stefano Coletti was on a move, taking both Mitch Evans and Andre Negrao into turn one, and passing Sorensen for third at the same place on lap later.

He would go on to pass his fellow Monegasque driver Richelmi and challenge Palmer for the lead, getting to within 0.7 seconds at one stage. Palmer had enough in hand however to secure victory by 1.5s.

Coletti, Richelmi, Sorensen and Negrao would follow him, while Evans’ race came to an end when he banaged wheels with Negrao at the first chicane while attempting an overtake around the outside.

That promoted Jon Lancaster to sixth, but the Briton was under investigation for choosing to go over the white line on the pit straight to overtake Arthur Pic.

Palmer’s title rival Felipe Nasr had an awful start from third on the grid, dropping back to ninth on lap one before recovering to finish seventh ahead of Pic. He has fallen from 30 to 43 points adrift of Palmer.

The safety car was triggered by a couple of incidents towards the end of the first lap. Sergio Canamasas decided to cut the Ascari chicane, making contact with Adrian Quaife-Hobbs once he dangerously rejoined the track. This caused a lot of bunching up behind with several cars going side-by-side on the run to the Parabolica and debutant Pierre Gasly getting turned across the nose of Artem Markelov and into the barrier. Ahead, Johnny Cecotto understeered into Nathanael Berthon.

Canamasas would have several further adventures, colliding with Rene Binder and Raffaele Marciello in consecutive corners and earning himself a black flag.

UPDATE: Lancaster was given a 20-second penalty for exceeding the track limits when he passed Pic. That drops him to 16th and promotes Nasr to sixth, Pic to seventh and Quaife-Hobbs to the final points position in eighth. Nasr therefore gains two points, putting him 41 behind Palmer. Gasly was given a five-place grid penalty.