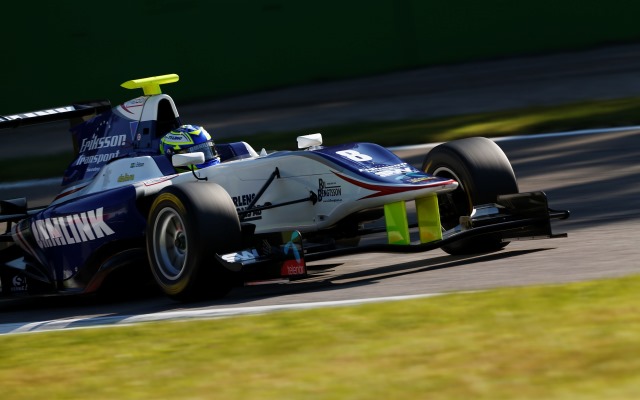 Jimmy Eriksson scored his second win of the GP3 season in race one at Monza, just staying out of reach of a late attack from Dino Zamparelli.

Starting from pole position, Eriksson retained the lead at the start and opened up an advantage of over a second over fellow front row starter Zamparelli.

Zamparelli cut the lead from 1.2 seconds to 0.8s on the penultimate lap and took another two tenths out of the Swede’s advantage on the last lap, but had to settle for his fourth second place from six races, still awaiting his maiden victory.

A strong start took Robert Visoiu from seventh to third at the start, and he was followed by Marvin Kirchhofer, with the German getting a push from behind from Dean Stoneman under braking for the first chicane that helped him to make up more places.

Kirchhofer had a few goes at getting past Visoiu in the early stages, and on one attempt he had nosed ahead on the run down to the second chicane, where there were yellow flags. Visoiu moved back ahead again on the inside line, but stewards decided that that was overtaking under yellow flags and slapped him with a drive-through penalty.

That allowed Kirchhofer to take the final podium position on his first points finish since his Hockenheim victory. Emil Bernstorff started and finished in fourth ahead of Stoneman, who survived late pressure from championship leader Alex Lynn.

Lynn lost ground on the first lap when he went across the inside of the first chicane, relegating him to eighth. He gained a place with Visoiu’s penalty, and then promptly overtook Patrick Kujala for sixth.

Behind Kujala, Matheo Tuscher finished eighth and will start race two from reverse grid pole. Ninth was Richie Stanaway, who also came a cropper on the first lap when he ran through the gravel exiting the second chicane. That put him down to 13th, but he would come back to ninth with a move on Status team-mate Nick Yelloly on the last lap. Yelloly had started third, but got a poor start and followed Lynn across the first chicane at the start.