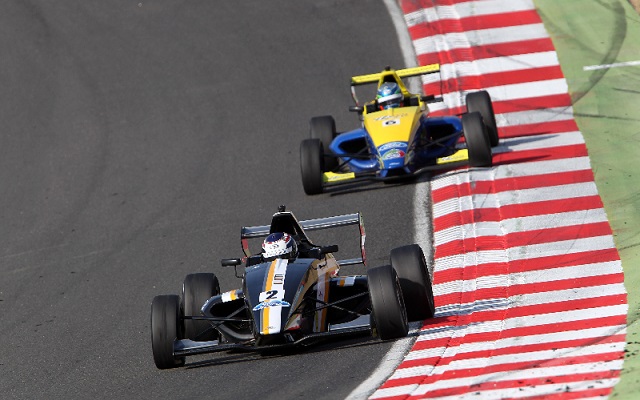 JTR’s Jayde Kruger converted another front row start into a victory in race three of the Formula Ford GB opening round at Brands Hatch Indy.

The South African racer managed to overtake polesitter Harrison Scott during a safety car restart and went on to cruise to the finish line, taking his second win of the weekend.

Falcon driver Scott managed a good getaway off the line and controlled the opening stages of the race, keeping rival Kruger at about a second behind.

The duo were, again, in a league of their own and quickly pulled away from the rest of the field, which was spearheaded by Kruger’s teammate Max Marshall. The Brit had his hands busy defending the final podium place from Radical’s Juan Rosso and their heated battle soon wound up creating a bit of a train behind the JTR racer.

Eventually, Rosso forced Marshall into a mistake at Paddock Hill Bend and, as the latter ran wide, both the Argentinian and JTR’s Sam Brabham managed to get ahead. Falcon’s Scholarship leader Ricky Collard tried to follow through shortly thereafter, but wound up making contact when Marshall closed the door. Collard retired on the spot with a broken suspension, bringing out the safety car, while Marshall tumbled down the order with cosmetic damage.

The safety car period bunched up the field with less than ten minutes to go, but it got hectic even before the restart, as Kruger tapped a slowing Scott in the back on the last lap under yellows. As the cars hit the restart, the South African got a run on the race lead and secured the inside line out of Paddock, emerging as the new leader.

Scott followed close behind for a few corners, but then appeared to slow down, dropping behind Rosso and Brabham. He kept up with the latter for the final laps of the race, but did not manage to salvage a podium finish.

As such, it was Kruger who celebrated victory, with Rosso and Brabham joining him on the podium. With Scott in fourth, Jack Barlow finished narrowly behind in fifth place, despite having stalled on the grid at the start of the race.

James Abbott was sixth, ahead of Marshall and Scholarship winner Chris Mealin. The other two drivers on the class podium – Connor Mills and Ashley Sutton – completed the top ten.