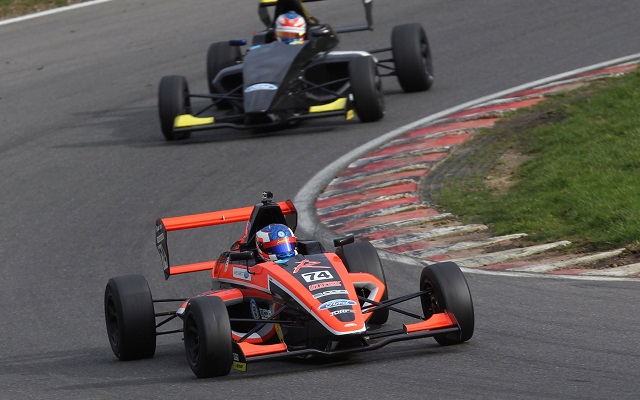 Radical Motorsport’s James Abbott made the most out of his reverse-grid pole position for the second Formula Ford race at Brands Hatch Indy by converting it into a career-first win in the championship.

Having finished sixth in the opener, Abbott lined up on pole for the second race alongside JTR racer Max Marshall. He managed to beat his front row rival off the line and held on to the lead over the opening lap.

Throughout the race, Abbott came under pressure from Scholarship class racer Ricky Collard and later from the charging Harrison Scott. While both of his chasers generally remained within a second behind, the race leader enjoyed a confident drive and crossed the line in first.

Having overtaken his teammate Collard midway through the race, Scott wound up settling for P2 and taking the lead of the championship. Collard himself kept third, picking up a maiden podium in just his second race in the category.

Marshall took fourth, missing out on the podium by 0.2s, while race one frontrunners Jack Barlow and Jayde Kruger didn’t manage to make much headway and finished fifth and sixth respectively.

Juan Rosso beat Ashley Sutton for seventh, with Sam Brabham, who started from the pitlane, and Chris Mealin rounding out the top ten.