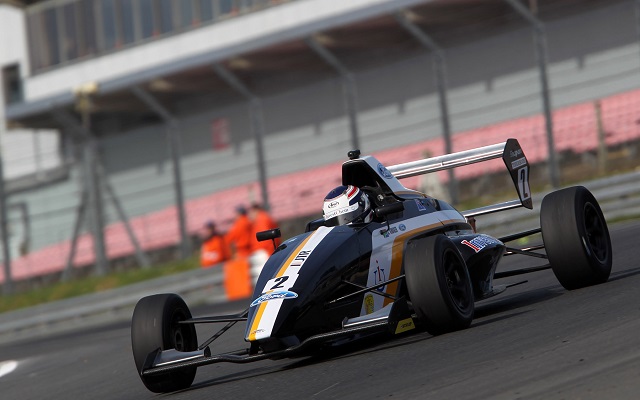 South African racer Jayde Kruger became the first winner of the 2014 British Formula Ford season, seeing off the challenge from poleman Harrison Scott in race one of the Brands Hatch weekend.

JTR’s 26-year-old recruit, who joined the team after finishing sixth in the standings with Jamun Racing in 2013, managed to get the jump on Falcon’s Scott off the line and would remain in the lead for the remainder of the 30-minute race.

Having lost first place, Scott managed to keep up with Kruger and ended up pressuring the South African for the lead for much of the running, before easing off in the final minutes to ensure second.

While it was a rather calm race for the leading duo, who quickly pulled away from the rest of the field in the opening laps, there was plenty of action further down the field. Sam Brabham, who moved into P3 over the first lap, found himself under constant attack from Juan Rosso and Jack Barlow throughout the race distance.

On lap 22, Brabham and Rosso came together, the former retiring on the spot, which allowed Barlow to comfortably settle into third. The BRDC F4 graduate maintained position until the checkered flag, picking up a podium finish in his first race in the series.

Ricky Collard took fourth, finishing as the highest-placed Scholarship Class entry, less than 0.3s ahead of Max Marshall, with James Abbott picking up a close sixth.

Chris Mealin was seventh, narrowly ahead of Rosso, who recovered after the Brabham incident to finish in P8. Ashley Sutton and Louise Richardson rounded out the top ten.

Scott will have another shot at converting pole into a victory in race three, while the race two reverse-grid grid will be headed by Abbott