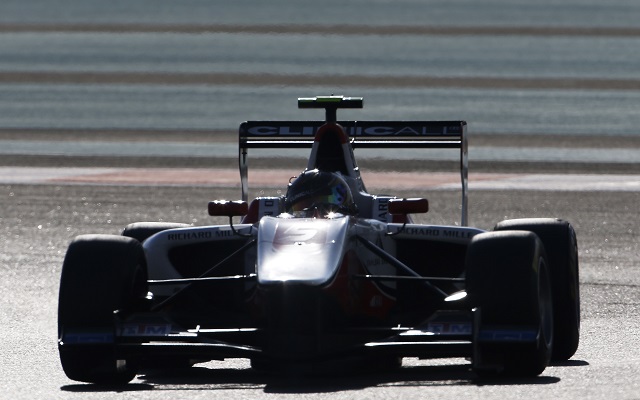 Marvin Kirchhofer scored his fifth victory of the season in the main GP3 race at Yas Marina after Esteban Ocon was penalised, keeping the title race wide open with a race to go.

The German crossed the finish line second behind Ocon but?his teammate received a five-second time penalty for exceeding track limits at the start.

Pole-sitter Ocon entered the first turn with Kevin Ceccon running alongside him but, even though his position looked safe, he ran wide at the exit and powered through to rejoin the track with a clear advantage.

His lead was never really challenged afterwards but he failed to build a big enough gap?to stay first in the order with his penalty applied.

Luca Ghiotto meanwhile struggled to have a good launch off the line and lost two places to find himself in sixth.

Front row starter Ceccon put some pressure on Ocon during the opening lap but the safety car neautralized the action when Adderly Fong‘s car was stranded on track after he was turned around.

Ceccon couldn’t challenge Ocon for the lead after the restart and his race soon saw a premature end when he had to pull his car over with mechanical issues, prompting a short VSC stint.

That put Kirchhofer in second and he maintained a gap of two seconds as he had Emil Bernstorff and Jimmy Eriksson closely following him throughout the race as the trio completed the podium in an unchanged order.

Ghiotto received a warning flag in the end after running wide three times and settled for fifth to finish just behind Ocon.

Matt Parry finished less than a second behind Ghiotto as the top six had a lead of eight seconds on the rest, led by Antonio Fuoco and Alex Palou, which will be the front row of tomorrow’s sprint race.

The top ten was completed by Matevos Isaakyan, who secured his first GP3 points, and Trident’s?Artur Janosz.

Having recorded the fastest lap of the race and finished a place ahead of Ghiotto, Ocon extended his championship lead to six points before the final GP3 race of the season.