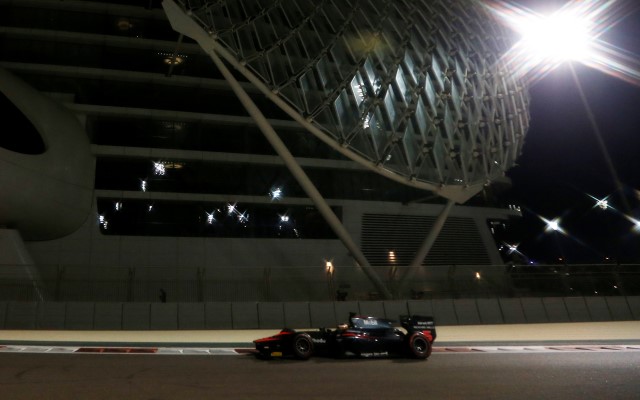 Stoffel Vandoorne claimed a record-breaking win in the final GP2 feature race of his title-winning campaign in Abu Dhabi.

The Belgian?s victory was his seventh of the season and his 11th in the series in total, putting him ahead of the previous records set by Pastor Maldonado in 2010.

Starting second on the grid, Vandoorne challenged polesitter Pierre Gasly into Turn 1 but the Frenchman squeezed him to the inside and left him with no alternative other than to back out.

Gasly, chasing his first race victory for over two years, was unable to pull away though, and Vandoorne stole the lead away down the inside of the Turn 7 hairpin on lap four.

From there, Vandoorne?s greatest competition would come from an improved Raffaele Marciello.

The Italian slipped back from fifth to ninth on the first lap as he struggled to get his medium tyres up to speed, but the race would come to him just laps later when the supersoft runners suddenly struggled.

Marciello, racing amidst doubts over his future with Ferrari, charged up to third pretty much within a lap and then took over the lead when the supersoft runners pitted at the end of lap five.

There he stayed until six laps to go, when a clean stop allowed him to rejoin in second place behind Vandoorne.

The Belgian had six seconds in hand and was able to extend that margin to 9.4s before the end as Marciello nursed the fragile supersofts.

Mitch Evans started and finished third, quickly following Vandoorne past Gasly in the early stages but unable to do anything about Marciello at the end.

His cause wasn?t helped by a delay on the front-right at his pitstop, which then meant he had to be held in his box as other cars came down the pits behind him.

Gasly had been close to Evans as they began to work their way past some of the drivers that started on mediums, but struggled to clear Gustav Malja and was passed by Alexander Rossi in the process as the American took fourth.

Gasly received a five-second penalty for speeding in his pitstop but that didn?t cost him fifth place.

It looked as if Jordan King ? the second of the drivers to start on mediums – would challenge him after a late pitstop, but he struggled to make those fresh tyres last until the end and only just kept Rio Haryanto and Alex Lynn behind him.

Gasly, Marciello and Lynn are now all tied for sixth in the standings, with the last-named set to start the final race from reverse-grid pole.

Haryanto meanwhile is just a point behind Sergey Sirotkin in the fight for fourth after the Russian was a muted 13th.

Andre Negrao and Nathanael Berthon completed the scorers, the latter after pitting later than Nobuharu Matsushita made him faster enough at the end to pass the Japanese driver.

Norman Nato and Nicholas Latifi triggered a virtual safety car when they tangled at the last corner as the frontrunners pitted.

Artem Markelov was running second to Marciello when his car came to a halt mid-race, while one other incident of note saw Sean Gelael crash in the pit exit tunnel late on.