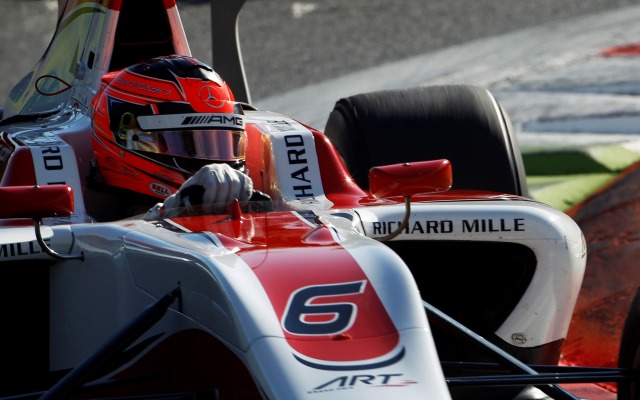 Mercedes has taken up the contractual option it had on Esteban Ocon, as the Frenchman bids to win the GP3 title this weekend in Abu Dhabi.

Ocon received support from Mercedes at the start of this season, after winning the FIA Formula 3 European Championship with its engine in 2014.

His status as a Mercedes driver has now been made official according to the German marque?s motorsport boss Toto Wolff.

In addition to his GP3 programme, Ocon has been a reserve driver for Mercedes? DTM operations and even came close to making his debut in the series at the final round at Hockenheim. He has also enjoyed F1 tests with Mercedes customer Force India.

Racing in the DTM could be an option for him next year along with a Formula 1 third-driver role, particularly if Mercedes can secure an F1 race seat with the Manor team for its other junior and new DTM champion Pascal Wehrlein.

?Yes, we?ve taken up the option on him, because he has been with us now following the DTM team for a while, he?s been the test driver in DTM, and integrated well and he?s doing a very good job in GP3 as well,? said Wolff in an F1 press conference in Abu Dhabi.

?He?s somebody we would very much like to have in the family, this is why we exercised the option.

?It doesn’t mean we have found a solution for Pascal. The current driver market is a bit difficult because most of the teams have already announced their drivers and it needs to be the right deal.

?But having taken up Esteban, we are conscious that we need to find a suitable programme for both of them.?

“It could eventually end up for both of them in a testing role, in a reserve driver role and in a DTM role, so it’s not done yet.”

Wolff was earlier quoted by L’Equipe as saying that ideally, with Wehrlein getting a Manor seat, Ocon would replace him in the DTM and as its third driver in F1.

Ocon had been a part of the Lotus F1 team?s junior setup until last winter but the team and its affiliated Gravity management company were unable to continue funding the Frenchman.

Earlier on Friday he claimed pole position for the deciding GP3 round in Abu Dhabi, giving him a two-point advantage over rival Luca Ghiotto going into the weekend?s two races.