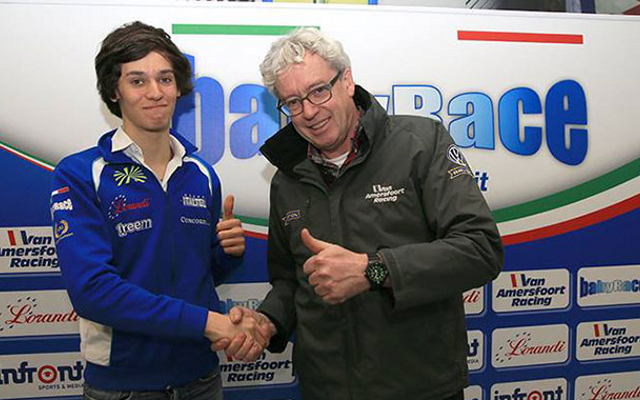 The 16-year-old signed up with Van Amersfoort Racing, the team that Max Verstappen made his successful transition from karting to racing with last year.

Lorandi, picked as number one karter to watch by PaddockScout in September, has had an extremely successful past couple of years.

In 2013, he won four trophies including the CIK-FIA World Championship, WSK Master Series and the Italian championship at junior level.

Spending another year in karts at senior level in 2014, he won the Winter Cup and Trofeo Andrea Margutti and finished second in both WSK Master Series and Champions Cup.

Lorandi ended his season with extensive testing in single-seaters, first with AVF and Fortec in Formula Renault 2.0 in November before moving on to F3 cars in December.

Lorandi will follow in the footsteps of Verstappen who made an unlikely graduation to the powerful and competitive FIA F3 championship and exceeded expectations, finishing third in the standings with ten race wins and landing an F1 seat with Toro Rosso.

“Max introduced us to each other and he only told good things about Alessio,? said team boss Frits van Amersfoort.

“At the time, he showed a good performance, but we advised him to get some more experience in single-seaters with additional tests. When we came back from Macau, we did further tests with Alessio and one could clearly see what the additional mileage with a race car did for him.?

“We are optimistic that it will work out. Even though he now follows the same path as Max Verstappen, this doesn?t mean that he will achieve the same results. We all would be more than happy if he only scores 25 percent of Max?s results.?

Lorandi is one of two drivers so far confirmed to race for Van Amersfoort this year, joining Formula Renault 2.0 graduate and another former top karter, Charles Leclerc.