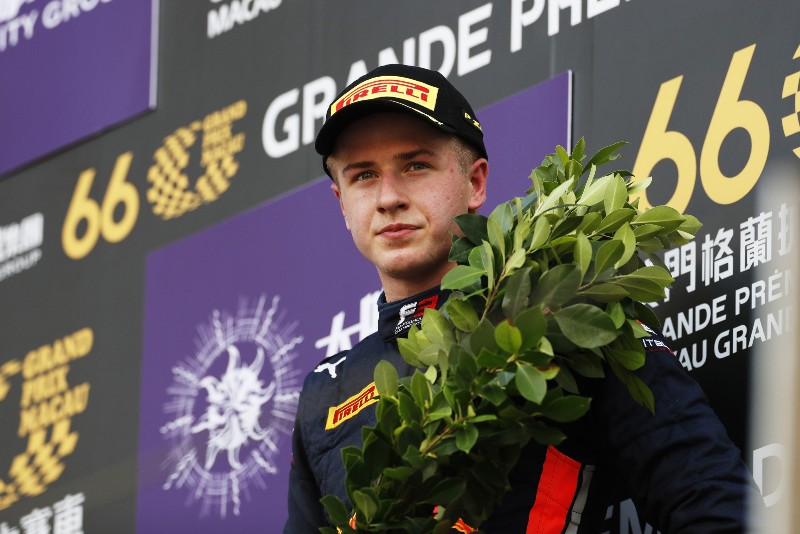 Macau Grand Prix runner-up Juri Vips has pointed to a failure of the Drag Reduction System on the FIA Formula 3 car as costing him victory.

The Red Bull junior started from pole for Hitech GP, and led the first few laps until the race’s only safety car period. He was passed at the restart by MP Motorsport rookie Richard Verschoor, then was unable to reclaim the lead in the 15-lap race.

Despite Verschoor damaging his steering by hitting the barriers, Vips was unable to match the Dutch driver in the last few laps and had to settle for second place after taking pole and winning the qualification race.

“It’s extremely disappointing because I think I’ve done a perfect weekend, and we didn’t get the victory today because the DRS was not working,” said Vips.

“It was working at the end, but it wasn’t working when it was supposed to, so I went for the move [on Verschoor] and locked up my tyres. That was my race done.”

During free practice, Vips adjustable rear wing flap remained open for a whole lap, while multiple failures in the qualification race prompted race control to make use of the DRS overtaking aid redundant across the grid.

“I could still catch up somehow [in the middle sector], even with the big flatspots, but it was a bit too big of a deficit with the front tyres in the last two corners, so I could never be close enough to attack for the victory.”

Vips also believes that he may have run over some debris from one of the crashed cars that caused the safety car period, contributing to him losing the lead at the restart.

“I don’t really know what happened there. I know I had something on my tyres, I don’t know if it was the debris from the crash. I felt going into the last two corners that my tyres were far from ready, and that’s how Richard got close to me and passed me.

“After the VSC, the DRS was supposed to work, but it didn’t. Then I thought the DRS was going to be cancelled the whole race like it was yesterday. So I thought I [had to] go for the opportunity, then I ruined my tyres by taking a risk trying a manoeuvre.

“In the last two corners the balance difference was too big to get a good exit and take advantage of the DRS when it finally started working in the last few laps.

“Richard deserved the win, he did a fantastic job today. He took the opportunities when they appeared, and he deserves the victory. Just a shame because we were a lot faster than him today.”

Having missed out on victory on his second attempt, Vips would like to return to Macau in 2020 to make up for this year’s loss.