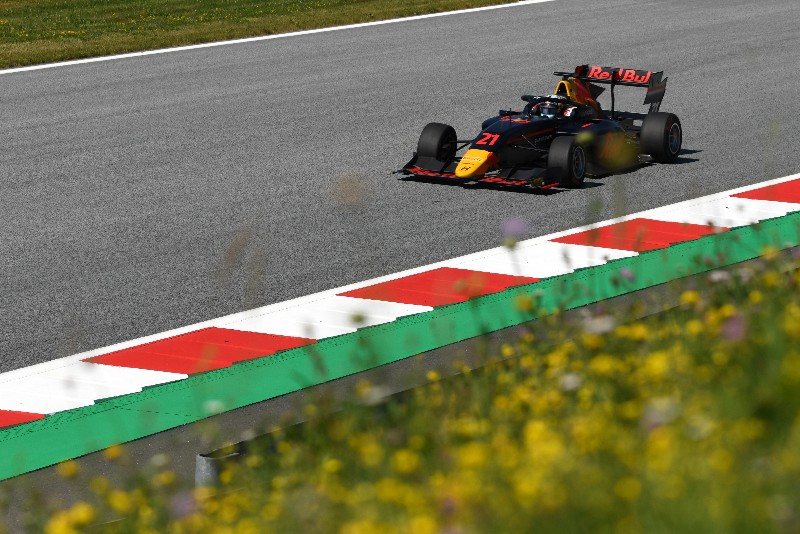 Fewtrell – a winner at the Red Bull Ring on both of his Formula Renault campaigns – didn’t last long in the lead, with Armstrong getting back past on the outside into Turn 3.

Vips briefly dived inside Fewtrell a lap later, only for Fewtrell to cut back past on the exit, but the Estonian made the move stick a lap later and promptly set the fastest lap – a second quicker than Armstrong to cut the lead to 0.7 seconds.

Two laps later, Vips overtook Armstrong for the lead on the run to Turn 4, and Fewtrell immediately followed him past on the inside under braking.

Vips set the fastest lap to immediately pull a 0.9-second gap by the end of that tour, and managed to consistently maintain that advantage crossing the line each time.

With the benefit of the Drag Reduction System, Fewtrell would close up in the first sector, but Vips was able to respond in sectors two and three.

With three of the 24 laps remaining, Fewtrell managed to close to within 0.7s across the line, but Vips responded to take the win by 1.7s.

Armstrong had got close to Fewtrell mid-race but ended up having to defend from team-mate Jehan Daruvala on the last lap, squeezing out the Indian on the exit of Turn 4.

Championship leader Robert Shwartzman recovered from ninth on the grid to finish fifth, getting past Pedro Piquet late on having spent much of the race stuck behind the Trident driver. Both had disposed of HWA Racelab’s Jake Hughes on the penultimate tour, with Hughes managing an unspecified mechanical issue.

Sauber Junior Team’s Lirim Zendeli snatched reversed-grid pole position from Leonardo Pulcini on the last lap after an impressive race from the Formula 4 graduate, who was on the tail of what was a nine-car lead train for most of the race.

Bent Viscaal ran 10th early on but couldn’t keep up, with Richard Verschoor instead winning a battle with his fellow Red Bull refugee Niko Kari for the final point.

After being disqualified from qualifying for their physios cooling their cars, ART duo David Beckmann and Christian Lundgaard had mixed fortunes from the back of the grid.

Beckmann made his way through to 15th place, but Lundgaard was 26th after being hit by Renault academy colleague Yifei Ye at Turn 4 on the first lap, forcing him to pit with a puncture.

Yuki Tsunoda rose from 25th on the grid to finish 16th, despite a penalty for hitting Alex Peroni into a spin.