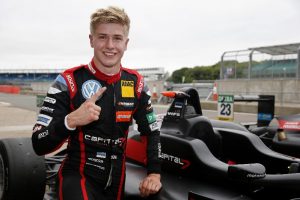 Formula 3 star Juri Vips says the next step in his career is still to be decided amidst a potential move to join Red Bull’s junior programme.

The 18-year-old Estonian could now be recruited to join his Motopark F3 team-mate Dan Ticktum on Red Bull’s books, as reported on Friday by Autosport.

He told Formula Scout last Sunday after the final European F3 round at Hockenheim that his future was unknown.

“This needs to be sorted out now,” he said. “We?ll see how Macau goes and everything, but I don’t know.”

Asked at Hockenheim whether the new series was his most likely destination, Vips said: “I hope not, because I had a good season [in F3] already. We?ll see. Maybe. It’s possible.

“F2 I can?t do for sure [because of budget], this I can confirm already. Maybe Super Formula or DTM would be very nice, but we will see what opportunities we have.”

Since placing then-GP2 champion Pierre Gasly in Super Formula in 2017, Red Bull has given Ticktum selected outings in the Japanese series – standing in for Red Bull-affiliated Honda junior Nirei Fukuzumi – and has said it could take more drivers there in the future.

Formula Scout asked Vips whether he had received interest from F1 teams, to which he replied: “Yes, probably after this season a little bit, but we?ll see what happens. [Right] now there?s nothing sure.”