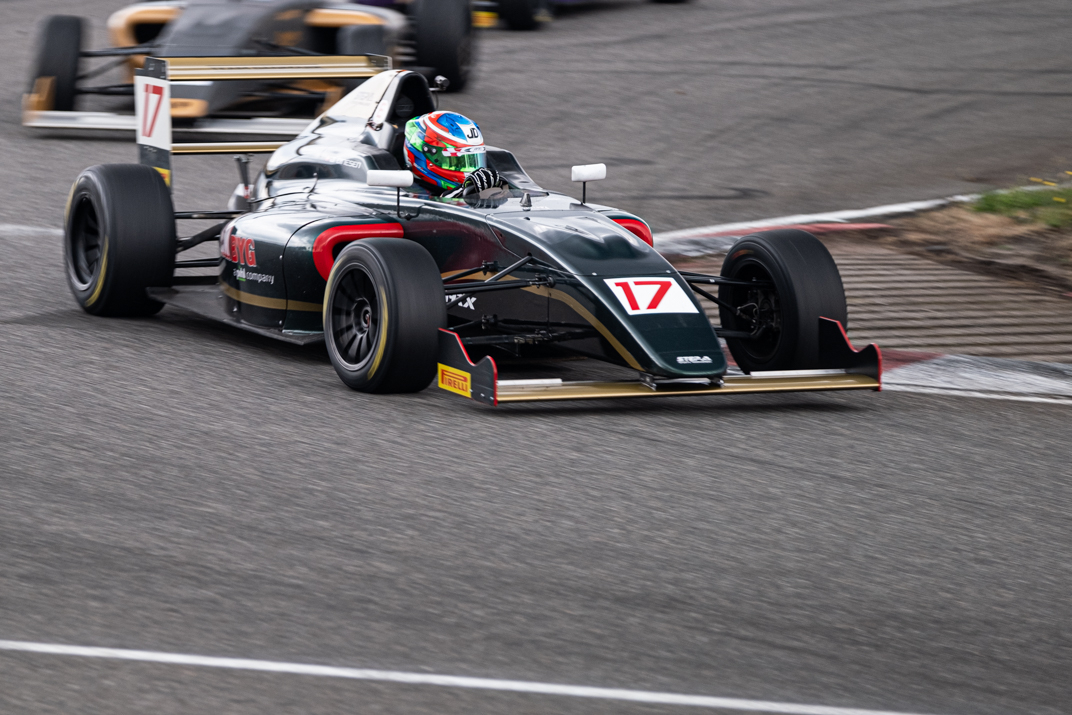 Mads Hoe dominated the final Danish Formula 4 round of 2022 at Jyllandsringen, as Julius Dinesen was crowned champion.

Dinesen, Sebastian Gravlund and Mika Abrahams went into the weekend fighting for the title, while reigning champion Hoe switched from his usual Formula 5 car to return to an F4 machine.

It was Gravlund who took pole, with a massive 0.937-second gap to Dinesen and 1.032s over the debuting Mikkel Gaarde Pedersen in third.

Gravlund’s advantage did not last long though, as Dinesen overtook him on the opening lap of race one. Hoe started in fourth and only need three laps to make his way to the front, before pulling away to take a record-breaking win by 2.91s.

Gravlund got back ahead of Dinesen on lap four, with Dinesen lacking the pace to stay with the top two.

Gaarde Pedersen, who despite only just turning 14 has already done plentiful test miles in an F4 car, finished fourth on his debut despite having to use the joker lap-style ‘penalty lane’ by the final corner, and Abrahams and Victor Nielsen did battle over fifth before Nielsen fell to seventh.

Nielsen started on the reversed-grid pole for race two and led for almost the entire race until Hoe, from seventh on the grid, came through at turn one with two laps to go.

Abrahams had similarly spent a long time in second place until Hoe got by on lap nine, then he lost further ground as he dropped behind Magnus Pedersen, Theodor Jensen and Abrahams. Just behind Abrahams was Dinesen, who made fell back on lap one from fifth on the grid. It meant he went into the final race eight points ahead of Gravlund.

Hoe and Gravlund shared the front row for race three, but between them by the end of lap one was Gaarde Pedersen and Pedersen from eighth and fifth on the grid respectively. The safety car was summoned as multiple cars spun and the cars of Abrahams and Mille Hoe needed to be recovered from the gravel.

Dinesen emerged from the chaos a distant seventh, but gained a spot when Michella Rasmussen fell to the back. After many laps chasing Nielsen, Dinesen then made it into fifth, and after that an error from Gaarde Pedersen promoted him another place and cost the debutant a maiden podium.

As Hoe romped to a 5.809s win – the 16th of his career – and rose from seventh to third in the standings despite missing two rounds, Dinesen followed third-placed Gravlund home to clinch the title.