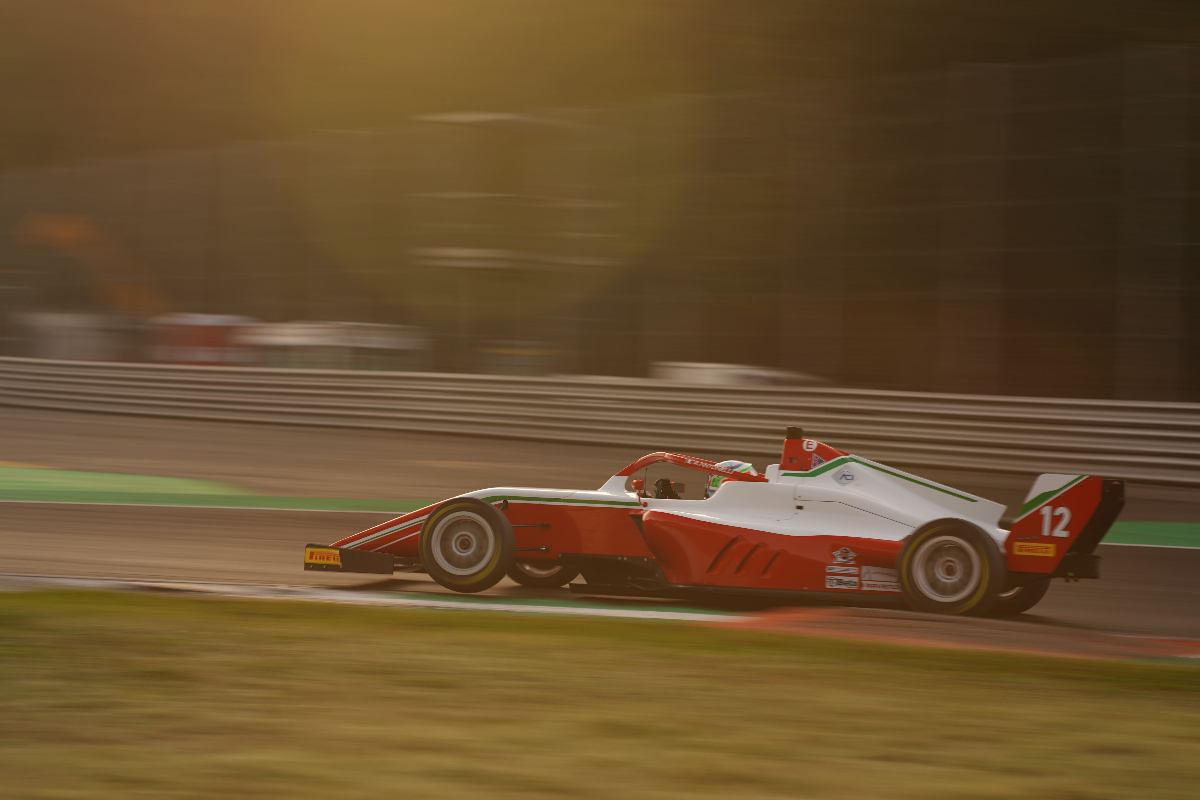 Prema’s Kimi Andrea Antonelli claimed victory in the rescheduled second Italian Formula 4 race at Monza, which was ended with a red flag.

The Italian led the way for the whole race bar one corner and extended his championship lead to 66 points going into the last round at Mugello. His team-mate Charlie Wurz and Van Amersfoort Racing’s Martinius Stenshorne finished in second and third.

The race was initially set to take place on Sunday morning, but was called off once the cars were already on the grid due to extreme weather conditions. It was then rescheduled to run place of race three, with the latter being planned to run at Mugello.

Race two eventually began behind the safety car as the track was declared wet. However, all drivers were fitting slick tyres for a track surface that was mostly dry.

The green flag was waved at the end of lap two, and poleman Antonelli comfortably led into turn one as team-mate Rafael Camara drove around the outside of US Racing’s Alex Dunne and Stenshorne to advance from fourth to second place.

Stenshorne, who was second at the start, then dropped to fifth behind Wurz, whereas Dunne regained the place on Camara as they accelerated out of the chicane.

The safety car was out after 10 minutes, to recover the car of Cars Racing’s Andrea Frassineti. Action resumed five minutes later with Dunne attempting a move on Antonelli for the lead around the outside at the first chicane. Both drivers cut the corner and Dunne immediately gave the position back to Antonelli.

Two laps later, Camara dived into the inside of Dunne at the first chicane and the Irish ran over the inside sausage kerb, which led to both drivers visiting the gravel trap at the outside of the corner.

Wurz moved up to second place as a result, having just overtaken Stenshorne and Prema team-mate James Wharton.

The safety car returned with over nine minutes remaining on the clock to clear the cars of R-ace GP drivers Raphael Narac and Frederik Lund from the Della Roggia. Jenzer’s Nandhavud Bhirombhakdi also had to be picked up after spinning at the Ascari chicane.

The track went green again with just under two minutes to go. PHM Racing’s Taylor Barnard was the only driver to make up places at the restart among the frontrunners, passing Hadrien David for fifth place.

The red flag was shown on the last lap due to some drops of rain, moments after AKM Motorsport’s Ismail Akhmed had spun round at the Ascari chicane and ended up beached in the gravel trap.

Neither Iron Lynx’s Ivan Domingues nor AS Motorsport’s Giovanni Maschio took part in the race. Maschio was involved in a heavy crash in the lap to the grid in the morning.