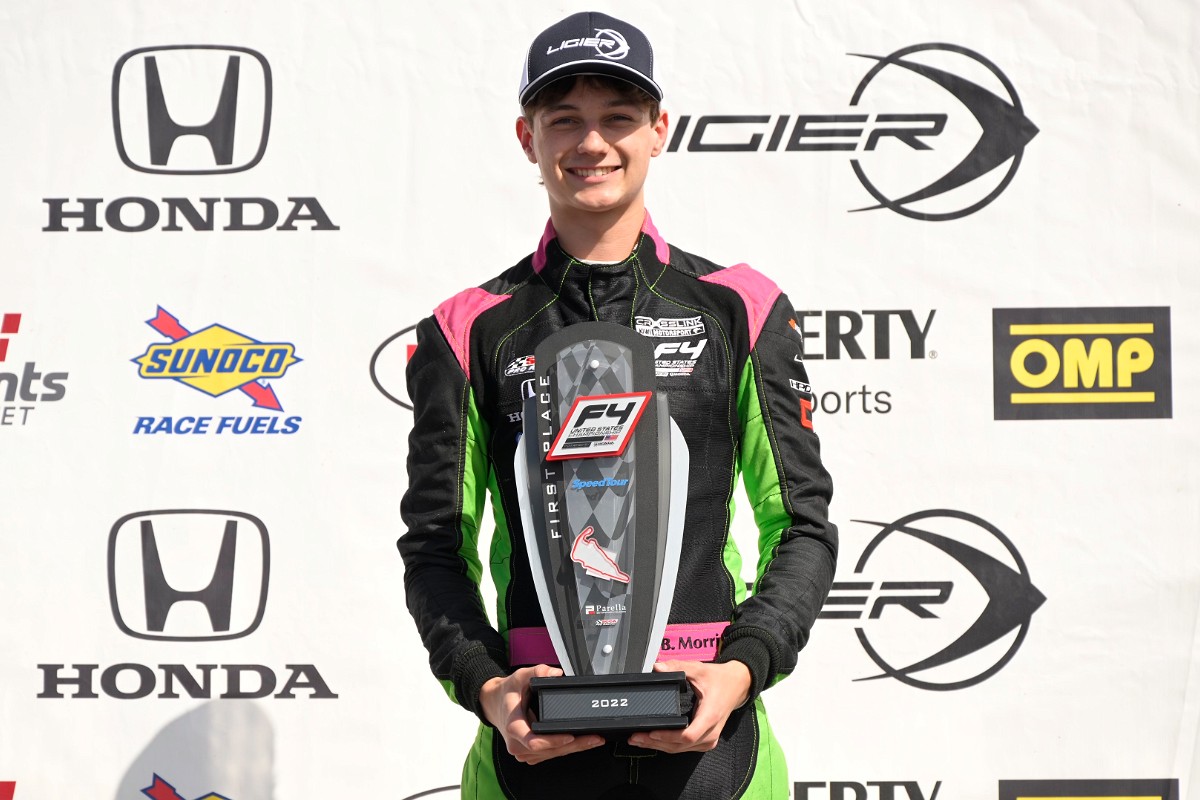 Bryson Morris strengthened his title bid in the penultimate United States Formula 4 round of 2022 at Virginia International Raceway.

Morris put himelf on pole, while pre-event points leader Lochie Hughes only qualified 10th, 1.583 seconds off the pace. He moved up a place on the race one grid though due to a three-place penalty for Louka St-Jean, and benefited from a rolling start due to the race being delayed.

The opening lap had some dramatic moments. Matt Christensen flew over the kerbs at South Bend, then moments later Hughes had a big lock-up entering Oak Tree before colliding and spinning with Alex Berg at the second apex.

A caution period was required to retrieve Hughes’ car, and racing did not resume until sixth and final lap of the race. The debuting Daniel Cara and Jacob Bolen went off at Horseshoe, the first braking zone of the lap, while Ryan Shehan tucked in behind Morris and then passed him for the lead on the straight after Oak Tree.

He held his team-mate off to win by 0.356 seconds, and Noah Ping was a further tenth of a second behind in third.

Taking fastest lap meant Shehan got to start race two from pole, while Hughes lined up 18th with a three-place grid penalty from his race one clash with Berg.

Andre Castro, Shehan, Morris and St-Jean went four-wide exiting the first bend when racing resumed, and the two drivers in the middle backed out before they got to Horseshoe. Castro on the inside and St-Jean on the outside did not, and as St-Jean turned in he ended up spinning as his rear-right wheel made contact with the front-left of Castro’s car.

Morris and several other drivers had to go off to avoid St-Jean’s car, and Castro emerged as leader ahead of Shehan and Morris.

On the next lap Morris got into the lead, and the lap after that Shehan demoted Castro to third. Morris made a small gap for himself as Hughes then made two overtakes to get into second, before a dicey move from Shehan got him back ahead on the final lap. But Hughes and Castro were able to re-overtake him to finish second and third behind new points leader Morris, until Castro was penalised 30s for causing a collision and was classified 14th. Ping made a remarkable recovery to fourth as a result, and St-Jean finished 10th.

Gabriel Fonseca set the fastest lap, putting him on race three pole ahead of St-Jean. But his race ended when he hit the brakes for the first time as St-Jean ploughed into him. A caution period was required, and several more cars managed to eliminate themselves while Morris spun out of third place and into the barriers but managed to keep going.

Ping led Hughes on the briefest of restarts, as the pace car did not actually go to the pits, and so the race finished under yellow with Castro completing the podium. As in race one, only half-points were awarded due to the limited green flag running and Hughes reclaimed the championship lead. Four drivers remain in title contention with one round to go.

Seth Brown was fourth on-the-road but penalised 35s and dropped to 12th, ahead of St-Jean who was penalised 30s.

During the weekend the 2023 calendar was revealed, which is identical to 2022’s.