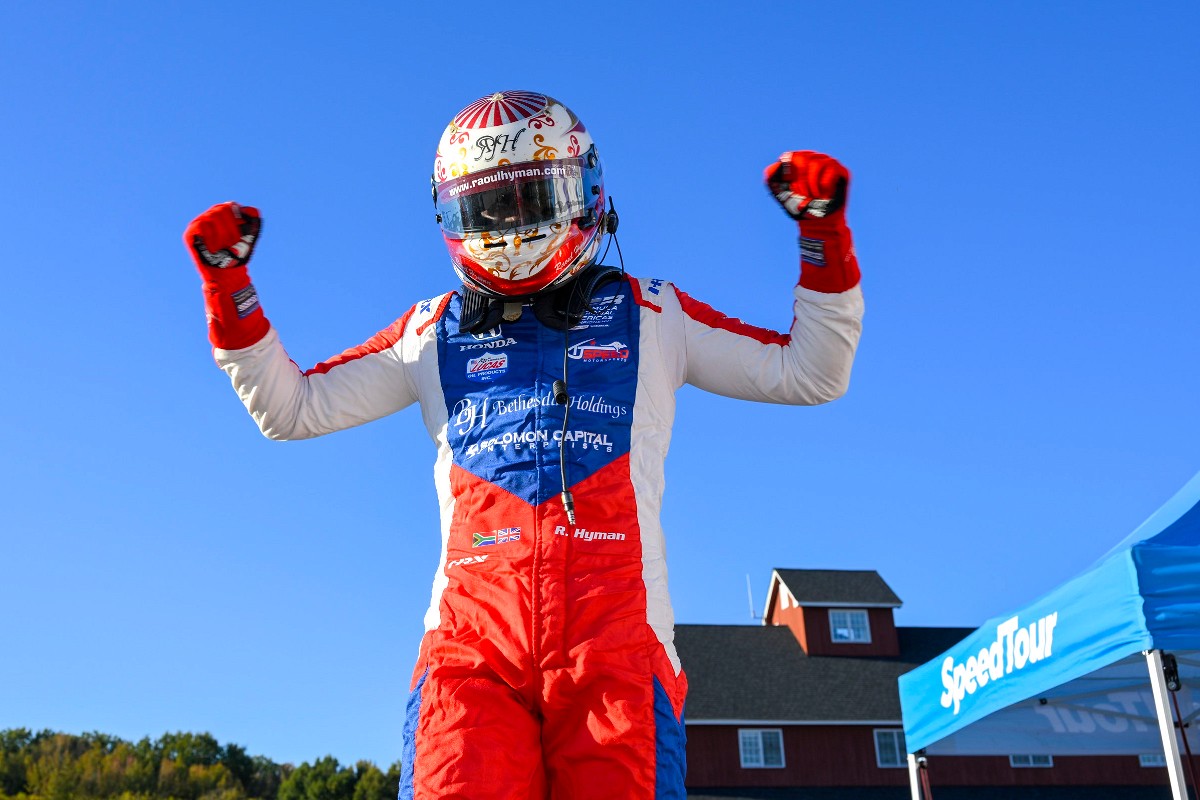 TJ Speed’s Raoul Hyman moved one step closer to the Formula Regional Americas title at Virginia International Raceway despite crashing in race one of the weekend.

Hyman took pole and started race one strongly as Jason Alder and Nick Persing fought over second place off the line. Persing dived down the inside of Alder at the first braking zone but got loose, locked up and collided with Hyman as they turned in. It sent Hyman spinning into the gravel, but he was able to get back on track.

Alder took the lead ahead of Mac Clark, Persing Dylan Tavella and Ryan Yardley, and Clark was able to get to the head of the five-car train before the end of lap one.

Once ahead he began pulling away, while Tavella went off at Oak Tree, but on lap four he threw away victory with a spin. Alder returned to first place, with a big gap to Persing and Yardley.

Alder earned his second win of the season by 6.184 seconds, with Yardley in second as Persing was penalised 30s for hitting Hyman who had recovered up to fifth and was pressuring the fighting Yardley and Tavella before he went into the barriers at Oak Tree on the penultimate lap.

He bounced back in race two later that day with a comfortable win. Clark initially rivalled him, but he eventually had to switch focus to defence and faded to fifth place. Tavella occupied second place after passing Clark, but he then lost the position to Alder late on.

Hyman had another lights-to-flag success in race three on Sunday. The battle between Tavella and Persing for second on lap one gave Hyman him breathing room briefly, but the slipstream effect enabled Tavella to close in on Hyman.

Persing soon had Alder and Clark attacking, and Alder lost a front wing endplate as he went on the inside of Persing at Horsehoe on lap two. Both fell down the order, and Persing had to pit for a new tyre.

Tavella was next to lose a lot of places as he pitted with an issue, turning Clark’s defence against Yardley into the battle for second place. He lost out to Yardley and Cooper Becklin, and the battle for fifth between Hayden Bowlsbey and Oliver Westling was then decided by an issue on Bowlsbey’s car.

Hyman cruised home to win and extend his championship lead to 70 points (with 75 available to score in the final round), and Becklin passed Yardley to finish a career-best second. Alder rose back up to sixth as others wiltered, but then got a three-place penalty that put him behind two lapped cars in the race result.

The 2023 calendar was announced during the weekend, and is identical to the 2022 schedule.