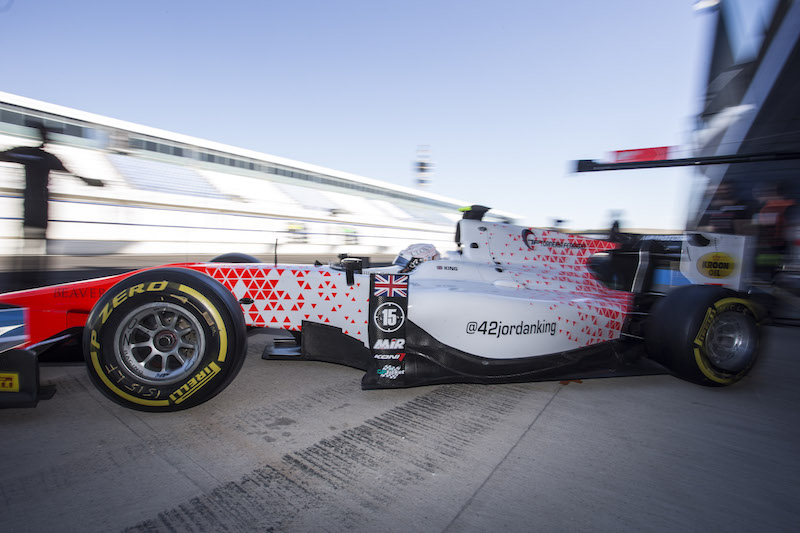 The entry list for the first 2019 Formula 2 pre-season test at Jerez has been released, featuring a surprise series return for IndyCar driver Jordan King.

King made his debut in F2’s predecessor?in 2015 with Racing Engineering, finishing 12th in his rookie year before rising to seventh in his second year in 2016. He switched to MP Motorsport for a third year in the series in 2017 before earning IndyCar graduation for 2018 – immediately impressing by qualifying fourth on his debut.

Despite continued great one-lap speed, it failed to come together for King in the races, and he could only obtain a one-off Indy500 drive for 2019 in the series.

He reunites with MP for the test, who will also run former Red Bull junior Richard Verschoor, who impressed in his part-season with the team in GP3 in 2018 and already tested the team’s F2 car in Abu Dhabi at the end of last year.

MP is yet to announce its drivers for the 2019 F2 season, while two other teams still have one space to fill. Campos, who has signed Jack Aitken from ART Grand Prix, will field GP3 race-winner and former MP driver?Dorian Boccolacci.

Trident will run Ralph Boschung, who has driven for Campos and MP in the series over the last two years, alongside the already-announced?Giuliano Alesi. The son of former Formula 1 race-winner Jean, has spent the last three years racing in GP3 with the Italian outfit.

Nicholas Latifi begins his fourth-straight year with DAMS, joined by Sergio Sette Camara, who switches from Carlin for his third shot at the title. The 2017 teams’ champion Russian Time has been rebranded as UNI-Virtuosi and will run rookie Guanyu Zhou alongside fourth-year driver Luca Ghiotto – who helped the team to that 2017 title.

Prema will continue with Sean Gelael for a second year with Formula 3 European champion Mick Schumacher continuing his relationship with the team.

Charouz, with its new Sauber backing, will run Ferrari junior Callum Ilott and fellow GP3 graduate Juan Manuel Correa, the latter of which topped the second day of F2’s?post-season test at Abu Dhabi.

Tatiana Calderon, who was announced as the series’ first-ever female driver last week, will test for Arden, with reigning?GP3 champion Anthonie Hubert in the sister car.

The three-day test kicks off on Tuesday.