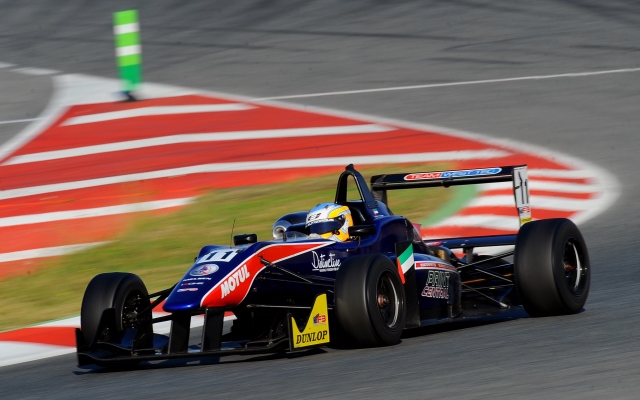 Ed Jones collected his third F3 Open pole position of the year in qualifying for race one of the title decider in Barcelona.

Although the early part of the session was dominated by the cars of RP Motorsport, they were beaten by Jones with more than ten minutes to go, as nobody was able to improve enough in the second half of the qualifying.

Alexandre Cougnaud will start alongside Jones as the Frenchman proved to be faster than Canadian Nelson Mason by only 0.014s. Santiago Urrutia dominated the first half of the qualifying, but he had to settle for fourth. Local driver Alex Toril ended up as the third fastest RP Motorsport driver in fifth.

Jones’ rival Sandy Stuvik was sitting in sixth for the better part of qualifying, however, unable to improve, he was also beaten by series returnee Tatiana Calderon and Mario Marasca in the last couple of minutes. As a result, Stuvik will only start from eighth place.

The top ten was completed by Hector Hurst (now with West-Tec) and Vicky Piria.