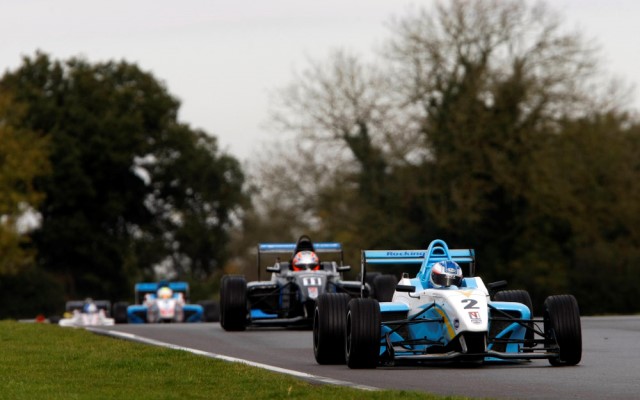 Matty Graham recovered from a poor start to claim victory in the opening race of the BRDC F4 Winter Championship at Snetterton.

Graham had qualified on pole position, two seconds clear of the field in a wet but drying session. With the track still damp come the race, Graham struggled to get off the line and slipped to third as Falco Wauer took the lead ahead of Sennan Fielding.

Driving for Douglas Motorsport, Graham quickly found a way back past HHC Motorsport man Fielding and set about closing the near-two-second gap to Wauer up front.

By the start of lap four Graham had pulled alongside Wauer, and moved past into Riches corner. He took the chequered flag after ten laps with a 2.9 second advantage.

“I picked up a lot of wheelspin off the line but I managed to claw my way back and ended up with the win, so the job was a good one,” said Graham. “I was expecting it to dry quicker than it did, but it’s so cold, and track conditions were the same as in qualifying really. We have pole for race two now, so hopefully we can get another win later on.”

Wauer finished in second in the first BRDC F4 race for the Enigma Motorsport team. Having been out of action since June, Fielding claimed third on his return.