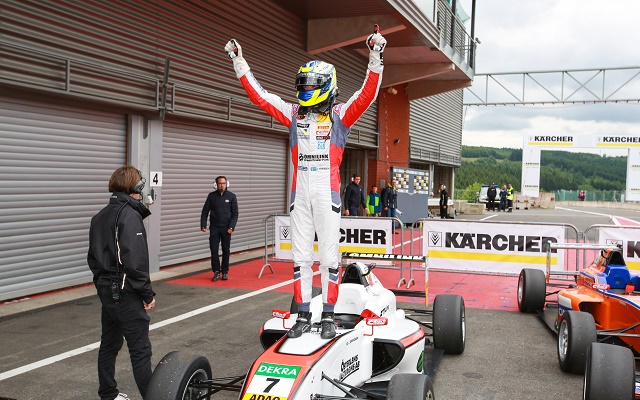 Motopark’s Joel Eriksson has continued to sweep the ADAC F4 round at Spa-Francorchamps, winning the second race of the weekend.

Eriksson has now won four of the last five races and will move further ahead in the lead of the standings.

On a very damp track, the Swede got a solid launch off the line, as did Robert Shwartzman, who moved up from fourth on the grid to an early second.

Prema’s Ralf Aron, who had started on the front row alongside Eriksson, briefly retook the spot from Shwartzman, but ran wide after completing the move and undid his progress.

Aron was then also overtaken by Shwartzman’s teammate and series newcomer Lando Norris.

The Briton then attempted to dive past Shwartzman into La Source, but the Russian maintained momentum on exit and retook the position into Eau Rouge.

All the fighting allowed the pacesetting Eriksson to stretch his lead to five seconds in just three laps, but when Marylin Niederhauser spun off and got stuck on the grass, the resulting safety car eliminated the Swede’s advantage.

At the restart, Eriksson quickly established a lead of a second, while Norris finally overtook Shwartzman for good.

The race leader then suddenly began to struggle for pace, allowing Norris to close in, with the Briton eyeing a debut victory.

He’d come closest to making a pass into Bus Stop on the penultimate lap, briefly going side-by-side with Eriksson but yielding on corner exit.

Next time by, the duo took the chequered flag half a second apart, while Shwartzman and Aron followed in third and fourth.

Harri Newey fought his way up to fifth after the restart and then managed to hold off Marvin Dienst over the final minutes.

Ferrari protege Guan Yu Zhou, who claimed a podium finish yesterday, spun in Eau Rouge on the opening lap and then retired after contact with Tim Zimmermann after the restart.

Dennis doubles up in action-packed third F3 race at Spa