Dennis doubles up in action-packed third F3 race at Spa 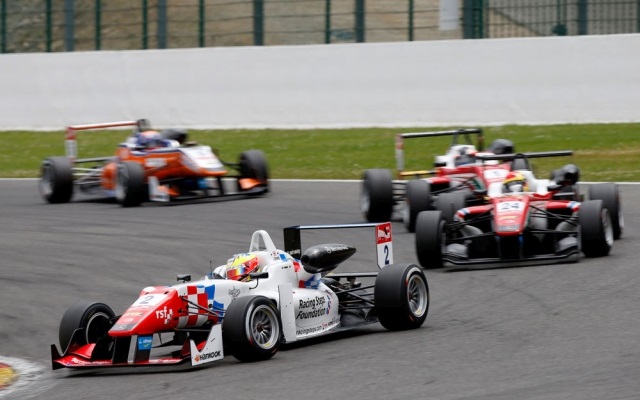 Jake Dennis converted his pole position into his second FIA F3 victory of the weekend in the final race at Spa-Francorchamps.

The race got underway under damp conditions which favoured the wet tyres in the beginning but most of the field started on slicks regardless.

Starting from the front row, Mikkel Jensen claimed the lead after the start, taking advantage of a slow getaway from Dennis.

The Dane stayed there for the first part?of the race despite running wide on two occasions, however, there was plenty of action behind them.

Contact between Raoul Hyman and Arjun Maini left the former’s car stranded at turn one, which initiated a safety car period.

At the same time, Sergio Sette Camara and Dorian Boccolacci collided at Les Combes from fifth and sixth, for which the Brazilian was later handed a drive-through penalty.

Jensen was not able to establish a safe gap after the restart and soon found himself under pressure from a train of cars.

His lead did not last for much longer as he and Dennis touched while the Briton was trying to make a move on the outside at Les Combes, which put the Dane into the wall.

It was not Dennis who took over first though as Tatiana Calderon, who opted for wet tyres, easily passed him.

Track conditions only allowed her to head the field for a couple of laps before starting to drop down the order, eventually pitting for slicks.

Dennis finally retook his starting position with Charles Leclerc settling in second and the duo cruised the to finish line afterwards.

Markus Pommer and Felix Rosenqvist were running third and fourth after passing Calderon. The Swede was trying to advance at?the Les Combes, but the Motopark driver squeezed him onto the kerbs, which almost saw Rosenqvist losing control.

Although he kept going, Pommer still received a drive-through penalty for dangerous driving.

This was not the end of their battle however, as Rosenqvist was spun out by the German at La Source next time around when Pommer locked up on the inside.

Rosenqvist dropped down to sixth but Pommer came out worse, being shown the black flag and disqualified from the race.

Antonio Giovinazzi inherited third but the Italian was also not allowed to keep that position in the end, as he was ordered to the pits to fix his damaged front wing.

As such, it was George Russell who completed the podium after passing fellow Briton Callum Ilott during the closing stages of the race, but the Red Bull Junior still took his best finish yet in fourth.