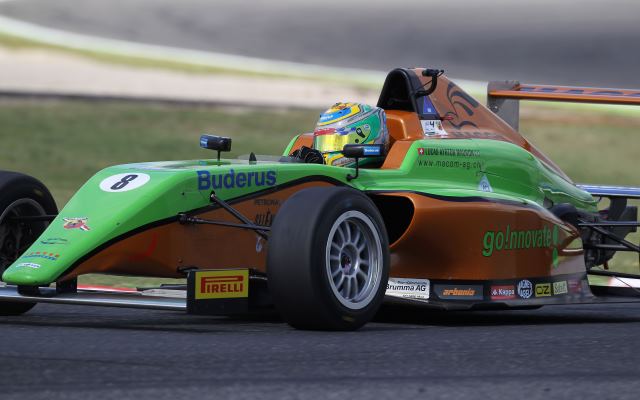 Three drivers have been confirmed with Jenzer Motorsport for this year’s Italian F4 season, which begins at Vallelunga next weekend.

Argentinian Marcos Siebert, who previously raced for the Swiss squad in Eurocup Formula Renault 2.0 in 2013, joins Lucas Mauron and Nico Rindlisbacher, who both continue in the same series and team for a second year.

19-year-old Siebert scored two points in the Eurocup in his maiden European campaign in 2013.

Mauron (pictured), 17 next month, finished 10th in the Italian F4 Championship last year with a best result of fifth at the final round at Imola.

Rindlisbacher, 18, was 21st in the standings and took his best finish of ninth at Monza.

An entry list has been revealed for the Vallelunga round, firming up some additional entries.

Russian driver Yan Leon Shlom is named as a third driver for Malta Formula Racing, which last year ran runner-up Mattia Drudi‘s car. Shlom, who is also entered for ADAC F4 as a privateer, steps up from KF karting where he finished third in the Trofeo delle Industrie and eighth in the Trofeo Andrea Margutti last year. He joins Raul Guzman and Kevin Kanayet in the Malta team.

Team Costarica lines up with Ecuadorian Fernando Madera, who steps up with the team from Formula Abarth, where he finished third last year.

Completing a 23-car entry list for the opening round are two Mucke Motorsport drivers from the ADAC series, Robert Schwartzman and David Beckmann. Schwartzman made his single-seater debut in Italian F4 at the end of 2014, while Beckmann will enter his first car race at Vallelunga because he only turns 15 next Monday, forcing him to miss the ADAC opener at Oschersleben this weekend.