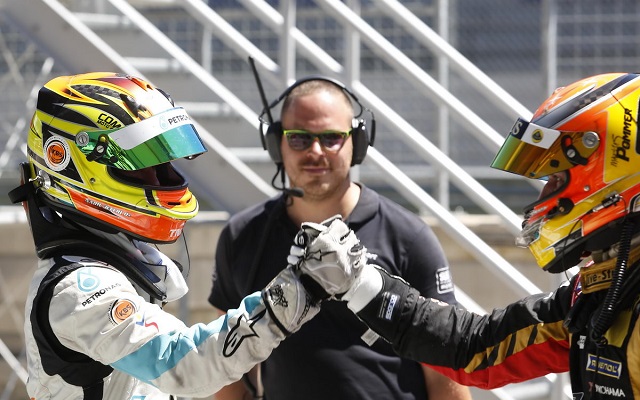 Nabil Jeffri and Markus Pommer remain the only two drivers to secure a pole position start in a 2014 German F3 feature race after both have picked up a pole each for the Hockenheim races.

Jeffri, who was quickest in practice, was in the lead early on, but was then dethroned by Pommer, who managed to further improve his benchmark coming up to the middle of the session.

With everybody in the field diving into the pits and emerging with fresher tyres, Jeffri managed to immediately return to the top, retaking the initiative into the final minutes of the session.

The timing of his best lap proved crucial, as neither he nor Pommer, who did manage to improve on his own earlier best time, would be able to go faster in their closing attempts. However, the German’s superior consistency allowed him to lock down pole for race three on second-best times.

Indy Dontje will round out a 1-2-3 for Motopark cars in both races. Sam MacLeod took fourth in the session, narrowly ahead of Santino Ferrucci and teammate Weiron Tan – who will both start ahead of MacLeod in race three.

Nicolai Sylvest will start both races in seventh, as Andres Mendez and debutant Dino Zamparelli both got an eighth place and a ninth place each. Finally, Nikita Zlobin will head Maximilian Hackl despite having retired early on in the session.