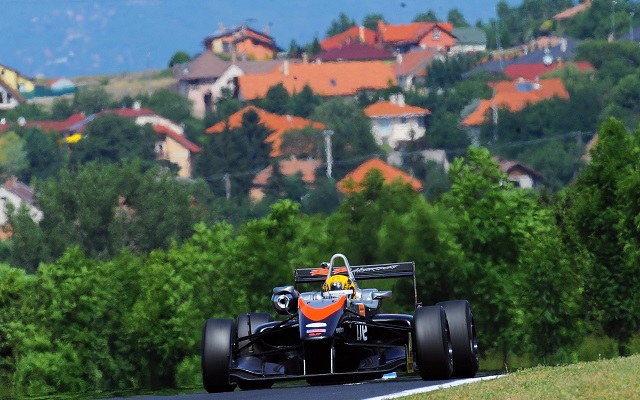 RP Motorsport’s Artur Janosz claimed his second win of the 2014 Euroformula Open season with a calm and collected drive from pole at Hungaroring.

Janosz got off to a good start from pole and looked set to lead the field into turn one when his teammate Sandy Stuvik attempted to dive down the inside. The Thai racer ended up cutting the first corner, which then saw him go wide and lose numerous positions.

As such, both Janosz and fellow front row starter Alex Palou maintained first and second respectively through the subsequent corner.

Further down the grid, Nicolas Pohler ended up making contact with Cameron Twynham which resulted in the Briton’s car upside-down in the runoff and led to a safety car.

A few laps later, the race went back to green and Janosz comfortably held on to the lead, crossing the start-finish line 0.7 clear of Palou. It was smooth sailing for the Pole from that point on as he controlled the remainder the race.

Palou was the only driver who managed to keep up with Janosz over the early laps as the gap stayed at a second and a half. The Spaniard finally settled for second in the closing minutes and ended up finishing three seconds down.

Guatemalan racer Andres Saravia stayed out of trouble in third, securing his maiden podium in the series. Dzhon Simonyan finished the race in fourth place on the road, having cleared Sean Walkinshaw in the final laps, but the Russian would not get to celebrate a repeat of his personal best finish as he was hit with a late penalty.

With penalties and incidents up the road, it was Stuvik who recovered to fourth, with Walkinshaw crossing the line in fifth. Konstantin Tereshchenko took the flag in sixth, but also received a post-race penalty.

The race saw another major incident midway through when Che One Lim and Yarin Stern came together at T1 while fighting for sixth. Stern retired on the spot, while Lim immediately rejoined the racing line and ended up tagging Christopher Hoher.