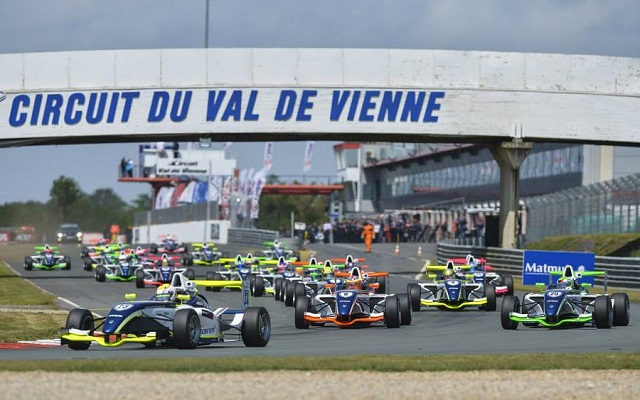 Danish racer Lasse Sorensen moved into the lead of the French F4 championship with a controlled lights-to-flag drive in race one of the third round of the season at Val de Vienne.

The Dane got off to a great start from pole, while fellow front row starter Hirsiger slightly bogged down at the lights. However, the Anglo-Swiss driver managed the keep the inside line into turn one and retained second place, subsequently breaking away from the pack along with the race leader.

Previous points leader Dorian Boccolacci made a superb start to the race and took over in third from newcomer Patricio O’Ward on lap two. However, the Lotus junior struggled once in the top three and had to defend every corner from O’Ward and, subsequently, Paul Hokfelt.

Boccolacci’s podium bid ended with a spin shortly thereafter as Hokfelt assumed third. With Sorensen and Hirsiger way up the road, the Swiss driver couldn’t pick up the pace in clean air and spent the entirety of the second half of the race under constant pressure from O’Ward.

Out front, Sorensen gradually increased his lead from Hirsiger, eventually taking it to fourth seconds and picking up the best lap of the race. The Dane was left to cruise to his first win in the championship, while Hirsiger settled for a well-deserved second place.

Despite O’Ward slipstreaming past Hokfelt on the straight on the two final laps, the latter managed to stick to the inside line both times and held on to a career-first podium in the series. O’Ward marked his debut with fourth, while Denis Bulatov passed Joseph Mawson on the final lap to claim fifth.

Boccolacci recovered from tenth after the spin to an eventual seventh place, ahead of Bryan Elpitiya, Amaury Richard and Valentin Hasse-Clot.