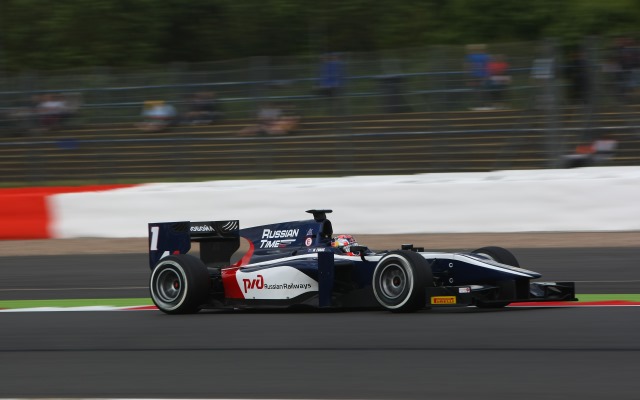 Mitch Evans scored his first ever win in GP2 as he beat Jolyon Palmer to victory in the Silverstone feature race.

Pole-sitter Raffaele Marciello led the opening stages after a super start, before pitting to replaced his option tyres with a set of primes. Palmer and Evans continued in first and second, having started on primes.

Marciello rejoined in traffic, meaning he began losing time to his rivals up front. His victory hopes then cruelly ended for good when his car spluttered to a halt at Brooklands.

That switched the focus to the battle between Palmer and Evans. The New Zealander had got ahead of the Briton on the first lap, but Palmer fought back on lap four to regain the place.

Evans stuck with Palmer though until the DAMS driver pitted, and Evans used a fast in-lap to leap ahead when he visited the pits one lap later. Palmer was on Evans’ tail at that stage, but the Russian Time driver managed to extend the gap to 4.9 seconds before taking the chequered flag.

Felipe Nasr had held third until a slow pitstop send the Brazilian down the order. Stoffel Vandoorne was on hand to score his consecutive feature race podium, albeit 20 seconds behind Palmer.

Stefano Coletti was jumped by the early-stopping Julian Leal when he made his own pitstop, but did manage to regain the place and looked set for fourth. Leal didn’t give up though, and challenged Coletti at the outside of Stowe on the last lap. There was contact between the two there and at Club, but Leal managed to get the place. The Colombian had started fourth, but fell back as far as ninth on the opening lap before recovering.

Johnny Cecotto finished sixth ahead of Nasr, who did manage to recover one place at the end by passing Stephane Richelmi with a move around the outside at Brooklands, but the Brazilian saw his gap to points leader Palmer increase.

Debutant Marco Sorensen got a flying start but fell back to ninth, while Daniel Abt finally secured his and the Hilmer team’s first point of the season in tenth.

Update: Stewards decided to penalise Leal for causing ‘a careless collision’ with Coletti in their last-lap scrap, dropping him back to fifth in the final classification.

*Demoted one position for causing a collision