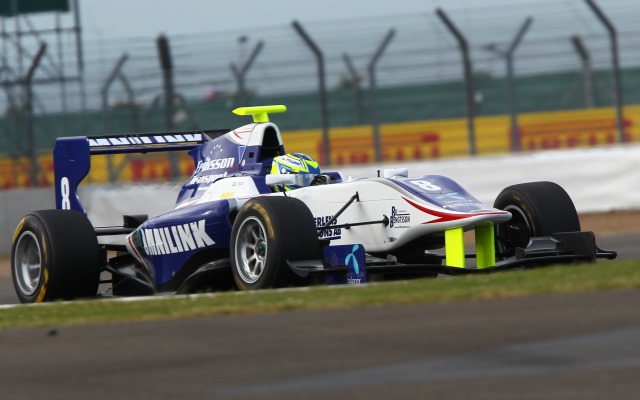 Jimmy Eriksson held on under a late attack from Alex Lynn to score his first win in the GP3 Series in race one at Silverstone.

Neither Eriksson or Lynn got particularly good starts from the front row. Fourth-placed Jann Mardenborough did, but Lynn forced his fellow Briton almost into the wall, allowing Eriksson to keep the lead.

The Swede quickly built up a healthy lead, holding a 2.4 second advantage after just three laps. Lynn later began to cut that back, although Eriksson did respond by setting the fastest lap. That was bettered by Lynn though as the Briton reduced the difference down as far as 0.3 seconds with two laps left, searching for his third straight race one victory.

He was unable to find a way past though, with Eriksson avoiding any errors and Lynn struggling in his dirty air in the high-speed corners. Eriksson managed to get the gap back up to 0.9 seconds as he took the chequered flag, completing the strong start to his season after failing to score any points in 2013.

Lynn claiming the fastest lap was crucial in him maintaining the championship lead, with the two bonus points on offer giving him a four-point margin.

Marvin Kirchhofer secured his maiden podium in GP3 in third place, seven seconds behind the winner.

Emil Bernstorff took fourth, holding off fellow Briton Nick Yelloly as well as Riccardo Agostini, who finished sixth in just his third GP3 start. Richie Stanaway was seventh, while Dino Zamparelli took eighth and reverse-grid pole after a grid penalty for a qualifying incident in which he ‘overtook in a dangerous manner whilst the marshals were working on track’ that dropped him from fourth to ninth.

After his super getaway, Mardenborough was swamped on the opening lap and dropped to ninth, where he fended off pressure from Dean Stoneman.