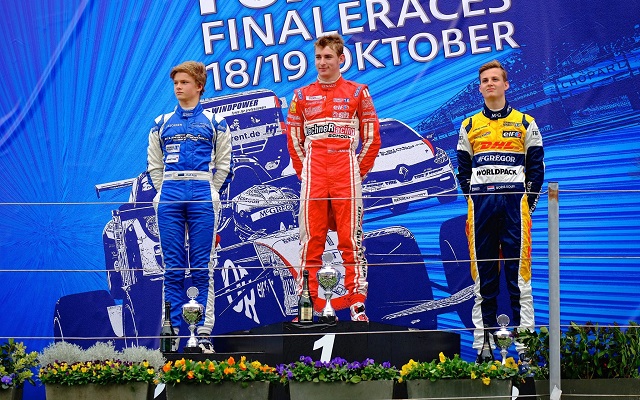 Lechner Racing School’s Florian Janits took his second victory of the current Formula Renault 1.6 NEC campaign in the final race of the season at Zandvoort.

Janits came through from third on the grid to first at the checkered flag in the wet race, which only spanned ten laps.

The first of those laps ended up taking place under safety car due to track conditions and, once the race went green, it seemed that series champion Anton De Pasquale was well on his way to a third win of the weekend.

However, having fought his way past Ferdinand Habsburg on lap two, Janits soon began reeling in De Pasquale and stormed past his teammate on the sixth lap.

Scuderia Nordica’s Ralf Aron and Provily’s Boris Kolff were two other drivers who seemed to excel in the latter stages of the race, catching up and passing De Pasquale on the final laps. Aron ended up clinging to second, while Kolff dropped down to sixth with a lap to go, but was back in contention for the top three when Habsburg and De Pasquale hit trouble on the final lap.

Amidst the chaotic final lap, Kolff narrowly found his way past Max Defourny to claim his maiden podium in the category.

Series debutant Laurents Hoor stayed out of trouble to claim a personal best result of fifth, ahead of Nico Otto, De Pasquale and Oliver Soderstrom, who was penalized early on in the race and completed the list of lead-lap finishers.