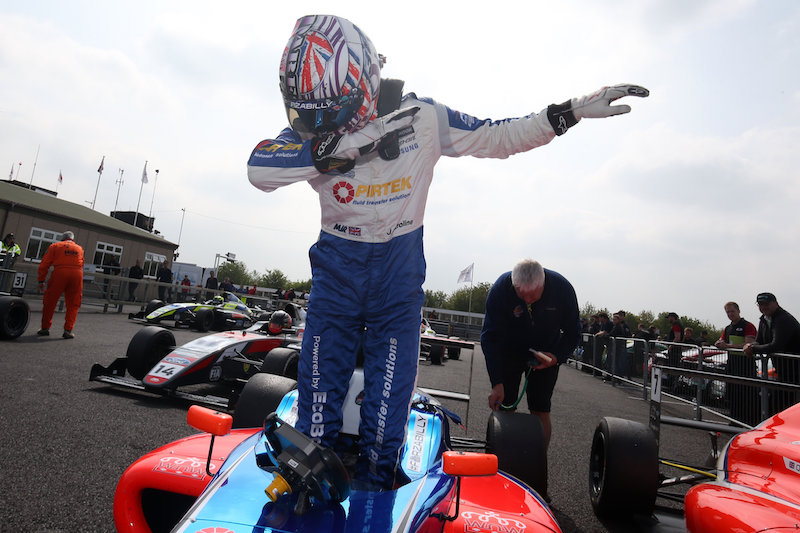 British Formula 4 leader Jamie Caroline continued his remarkable form with victory in race one at Thruxton, fighting back from sixth to first within a lap after going?off while battling for the lead in the opening corners.

Caroline dedicated the win, his fifth in seven races so far in 2017, to his long-time friend and competitor?Billy Monger, who lost both lower legs in a crash at the last race at Donington Park last month.

Lining up third on the grid, Caroline got alongside impressive pole-sitting rookie Oliver York for the lead, but ran off track at the Complex and slipped to seventh.

He made up one place past Karl Massaad on lap two, as up front, York was challenged for the lead by Linus Lundqvist and Logan Sargeant.

The?lead trio were all together coming out of the chicane at the end of lap three and, having already dispatched two cars earlier in the lap, Caroline swept around the outside of them with greater momentum and into the lead.

He quickly built a margin of 2.7 seconds,?and finished up two seconds clear despite strong pace from Alex Quinn, who got up into second on lap four.

Massaad took a surprise first podium, while York was?fourth, just keeping ahead of?Lundqvist, who had slipped to 11th after contact and a spin.

Patrik Pasma, who was also hospitalised in the accident with Monger at Donington, returned to action, completing the finishers in 13th.