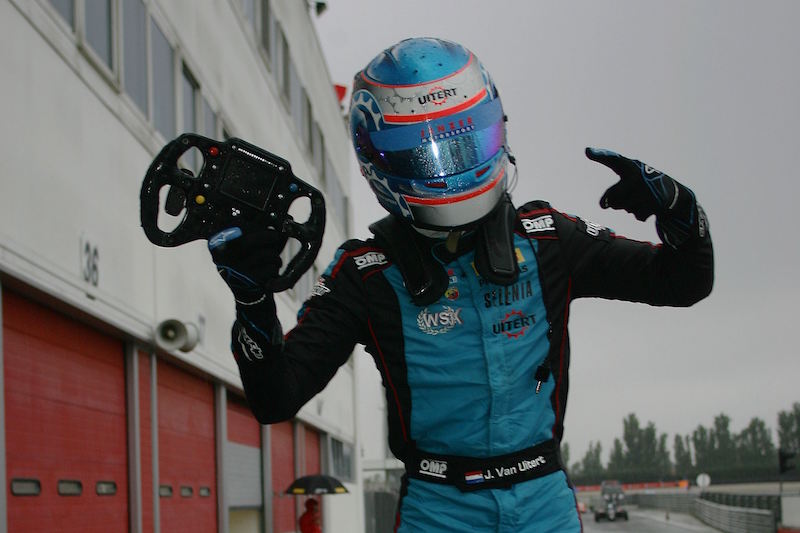 Job van Uitert splashed his way to victory after starting fifth in a wet opening Italian Formula 4 race of the weekend at Adria.

The conditions meant the race began behind the safety car, but Jenzer Motorsport driver van Uitert quickly rose to third on the first lap of green-flag racing, as pole-sitter Lorenzo Colombo opened up a lead over Marcus Armstrong.

Around half way into the 30-minute encounter, van Uitert passed Armstrong along the straight to Turn 3, at which point Colombo was nearly two seconds up the road.

Van Uitert quickly cut this gap however to challenge Colombo into the final corner just two laps later, and although the Bhaitech driver would pull back ahead across the start-finish line, he couldn’t keep the Dutchman behind him.

Van Uitert’s eventual margin of victory was five seconds, helped by Colombo heading across the grass at the chicane.

Armstrong was a similar gap back again as he picked up his second F4 podium.

Van Uitert’s Jenzer team-mate Kush Maini also went forwards, finishing?fourth after a penalty carried over from the opening round at Misano last month had relegated him from sixth to 12th on the grid.

The Indian?survived an early clash that sent another Jenzer driver Federico Malvestiti into a spin to beat third-place starter Leonardo Lorandi to the line.

Aldo Festante was on for a best-ever finish of sixth before dropping out on the penultimate lap, promoting Enzo Fittipaldi and Sophia Florsch.

Sebastian Fernandez, who won all three races at Misano last month, started the race from fourth but struggled?in the conditions and finished 14th.