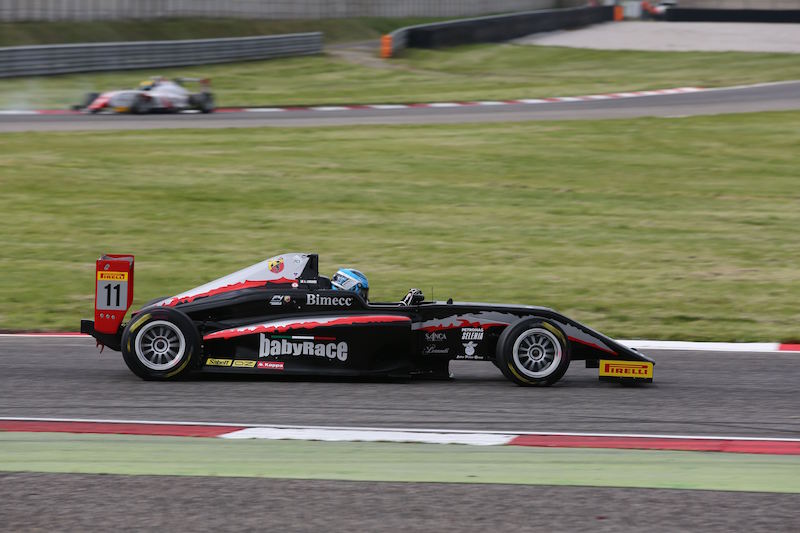 In a race that started under safety car despite the field being on slick tyres, Colombo led from pole in pursuit of his first victory.

Prema driver Armstrong got alongside the Bhaitech car on the second lap of green-flag running, but Colombo responded to increase his lead to nearly a second.

He responded again when the?gap came back down to half a second in the middle of the race, but Armstrong was back on his tail after a personal best lap with three minutes to go.

The New Zealander made a late dive to the inside of Colombo on turn-in for the Turn 7 hairpin and the pair banged wheels, with Colombo sent into the barrier on the outside.

Armstrong briefly took the lead, but the Ferrari protege had sustained damage and slowed before pitting.

This gave the win to single-seater rookie Lorandi, who started fourth and spent the early part of the race trying to pass race one winner Job van Uitert, with the pair even banging wheels themselves at Turn 7.

Lorandi, the younger brother of Pau Grand Prix winner Alessio, eventually found his way past cleanly at the same point and quickly closed the gap in his Bhaitech car to the lead duo before their collision.

He took the win by 1.5 seconds over Jenzer driver van Uitiert, with Mucke Motorsport’s Lirim Zendeli completing the podium.

After being denied sixth late on in race one, Aldo Festante smashed his previous best finish with fourth, holding of Misano hat-trick hero Sebastian Fernandez.

Artem Petrov came from 11th on the grid to finish sixth after working his way through a pack headed by Enzo Fittipaldi – who set the fastest lap on the final tour – Kush Maini and Sophie Florsch.