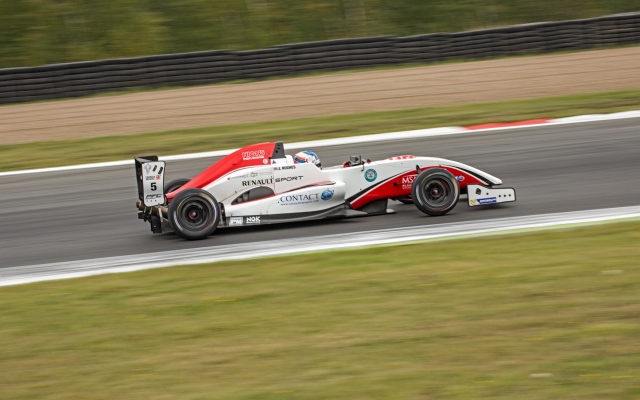 Jake Hughes set the pace in a 45-minute practice session ahead of the final round of the Formula Renault 2.0 NEC season at the Nurburgring.

The reigning BRDC F4 champion, in his second weekend driving with the ART Junior Team, set a time of 1m59.047 close to the end of the session.

He was a quarter of a second clear of the second best driver – his former team-mate at Mark Burdett Motorsport, Raoul Owens. Jules Gounon was third for AVF ahead of Formula BMW Talent Cup winner Robin Hansson.

The quickest of the drivers with a mathematical chance of the title was Ukyo Sasahara, who is sixth in the standings and was fifth fastest for Euronova. Championship leader Ben Barnicoat was sixth for Fortec ahead of AVF’s Roy Geerts, two-time winner Kevin Jorg and Seb Morris, who sits fourth in the standings, 39 points behind Barnicoat with a maximum of 30 points available in each of the weekend’s three races.

Steijn Schothorst, who is third in the points, 24 off the lead, completed the top ten times. Louis Deletraz, who is second to Barnicoat with a deficit of 12 points, was 16th fastest.

The first of the weekend’s three races takes place on Friday afternoon, and has been added to the timetable following the cancellation of the final race at Most due to heavy rain. The grid will be formed from reversing the top six from the first race in the Czech Republic, putting Andrea Pizzitola (13th in practice) on pole.