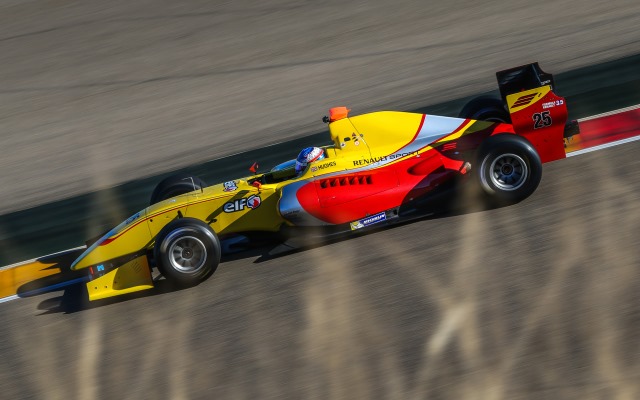 Jake Hughes returned to the cockpit of a Formula 3.5 V8 car to set the best time at the end of the first of two days of testing at Barcelona.

In a ‘private’ test attended by eight teams, it seemed as if AVF recruit Tom Dillmann had picked up where he left off at Aragon last month but his time was bettered by Hughes by 0.275 seconds inside the last five minutes.

The Briton was the only driver into the 1m29s around the Catalan circuit, which returns to the calendar for 2016.

Hughes was testing in a third series in as many weeks, driving for the same Carlin team with which he sampled Formula 3 last week, having also run in GP3 for a trio of teams the week before.

Two-time 2015 race-winner Egor Orudzhev, set to stay on with Arden for next year, was third ahead of Pietro Fittipaldi, who has joined Hughes in moving over from F3 to F3.5V8 with Carlin for a second taste of the series, having tested with DAMS at the same circuit 12 months ago.

Fifth was Roy Nissany for Lotus, the Israeli lapping five thousandths of a second quicker than he had done to top the morning session.

His fellow Lotus tester Kevin Jorg and Fortec?s Jack Aitken both returned to F3.5V8 after looking at GP3 since the last test and rounded out the top seven ahead of Dillmann?s AVF team-mate Celis.

Aitken had been second in the morning ahead of Fittipaldi, Hughes, Celis and early Fortec signing Louis Deletraz.

RP Motorsport made its F3.5V8 debut with its 2014 and ?15 Euroformula Open champions Sandy Stuvik and Vitor Baptista, while Pons ran one car for AVF FR2.0 regular Josef Zaruba.

Matevos Isaakyan, who topped sessions at Jerez and Aragon with Pons and has since contested two GP3 rounds, joined fellow SMP protege Atoev at Spirit of Race, but his running was limited to eight laps in the morning.

Strakka Racing and Tech 1 Racing are absent from the test, as is Teo Martin Motorsport, which has yet to run since taking over the DAMS entry.