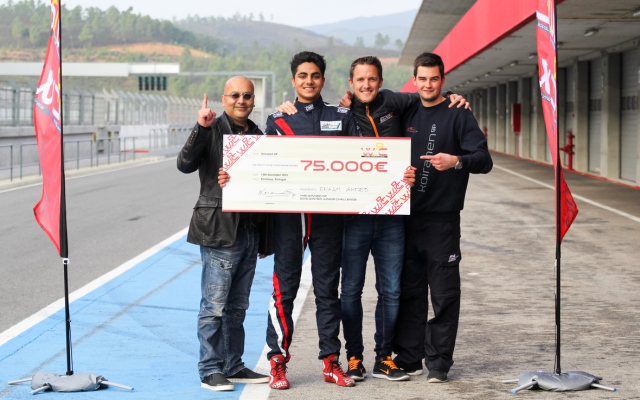 Seven drivers took part in the six races with the Tatuus-Abarth F4 cars fielded by Koiranen in its SMP championship, and which it will introduce into Spain next year.

French championship regular and occasional SMP series driver Simo Laaksonen won all three races on the opening weekend at Jerez, but two wins from Ahmed in Portugal were enough for him to take the overall crown.

Ahmed, who won five SMP races alongside an MSA Formula campaign in 2015 after dominating junior-level karting, receives prize money that can be used towards competing in the new Spanish series next year.

“I am happy about the outcome of my year and it is always satisfying to finish on a high note,” he said.

“It has been tough as the competition was hard and I am glad as the ?75,000 prize money will surely help me do several F4 Championships next year.”

Winning the second race at Portimao was Alexander Vartanyan, who contested two SMP rounds this year after stepping out of karting.

Also present were Devlin DeFrancesco, making his single-seater race bow after signing with Carlin for MSA Formula next year, and American F2000 driver Quinlan Lall, who has tested in Formula 3 with T-Sport.

Completing the field were Finnish karters Juho Valtanen and Tuomas Tujula, with Valtanen beating Ahmed to pole in Portimao and all seven drivers within less than seven tenths.