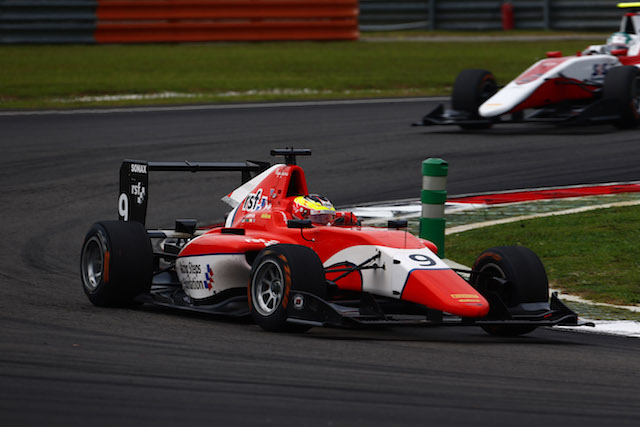 Jake Dennis has taken his second win of the season in the second GP3 race at Sepang. Dennis led from the second corner of the race after overtaking both Antonio Fuoco and Nirei Fukuzumi and didn’t look back to take the win by almost four seconds

Fuoco made the best start he could have hoped for off the line, holding first position into the first corner with Fukuzumi and?Dennis close behind. But in his attempts to hold off the Japanese driver behind him, Fuoco got all out of shape, locked?up his tyres and went over the kerbing on the inside of turn two. He launched his car into the air?and allowed?Dennis to overtake the pair?of them to?take the lead of the race.

Behind the lead battle, Charles Leclerc and race one winner Alexander Albon got very close together off the line, with the pair nearly colliding with each other down the main straight as Albon was pushed onto the grass. Both kept it together but it dropped Albon?behind several drivers.

Fuoco was struggling with the grip of his tyres and was locking up all over the place, and this allowed Jack Aitken to make his way passed the Italian to take third position. The next to get passed Fuoco was Matt Parry, and then finally Leclerc made his way through?down the main straight with the tow. Fuoco would eventually fall to the back and retire, putting his championship hopes to bed.

Meanwhile, the battle for the lower down positions between?Steijn Schothorst, Arjun Maini, Nyck De Vries?and Alexander Albon was heating up, as all of them were swapping positions corner after corner, with De Vries eventually winning out to take sixth?position. Maini eventually made his way passed Schothorst, but when Albon tried to make the same move, he was caught unawares and was passed by Alessio Lorandi.

Albon would make his way back passed Lorandi into turn one, and then he hunted down Schothorst in eighth, who he would pass by barging his way through out of the final corner.

But nothing was stopping Dennis, who took his second win of the season and second win in two rounds. Fukuzumi held onto second to take only his second podium of the year, with Aitken once again finishing on the podium in third. Parry held off the late charge by Leclerc to take fourth position, with Leclerc’s team mate De Vries coming home in sixth position. Maini finished in seventh position, with Albon clinging onto the last points paying position in eighth.