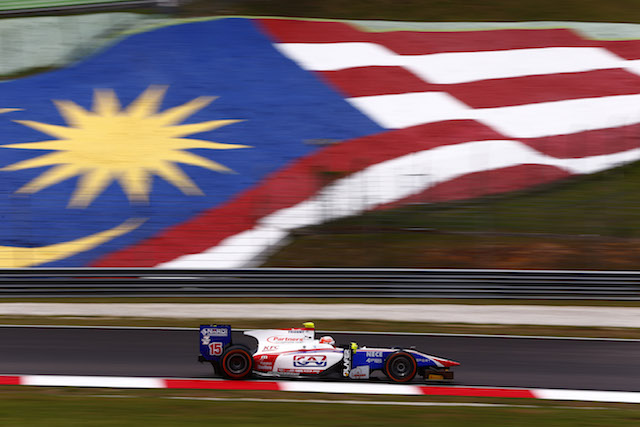 Luca Ghiotto has taken his first GP2 win of his career in the Malaysian?GP2 Sprint Race. Ghiotto took the lead out of turn two and held off a?late charge from?Raffaele?Marciello?to become the tenth different winner of the season.

Ghiotto had the better start and pulled ahead of Mitch Evans?off the line, but Evans wasn’t going to go without a fight as he?slipped back ahead into turn one, only for Ghiotto to get back ahead out of turn two to take the lead.

On the second lap, the two Racing Engineering cars went into turn two together, but as Norman Nato assumed the fourth position was his, Jordan King clipped the rear of the Frenchman’s car and spun him out on the spot. With Nato’s car going nowhere, the safety car had to be brought out. King was given a 10 second time penalty for the incident.

When the race went green again, Marciello tried a move on Evans into turn one, but was unable to pull it off until turn four as Evans struggled with brake issue. Meanwhile behind them, Gustav Malja made a move on King for fourth position coming out of turn two.

Pierre Gasly then made a move on Sergio Canamasas for eighth on the track on the inside of turn four, putting himself just behind Antonio Giovinazzi and Oliver Rowland. King was struggling with damage from his earlier incident, and was passed by both Rowland and Giovinazzi down the main straight. Giovinazzi then tried to take Rowland on the outside of turn four, but was pushed wide and went way off track, allowing both King and Gasly through on the Italian.

Gasly made short work of King in the DRS zone and then used the tow down the main straight on Rowland to put himself up into fifth place. Giovinazzi would follow his team mate through on Rowland a lap later as King fell down the field.

After a race long battle for third position, Malja was finally able to catch and pass Evans after a late dive down the inside of turn four. But because they were slowing each other so much, it allowed Gasly and Giovinazzi within striking range of the pair of them.

At the tail?end of the?of the points paying positions, a battle between Canamasas and Johnny Cecotto for eighth ended with Nobuharu Matsushita overtaking the pair of them. Matsushita started on the back row of the grid but was now putting in some of the fastest laps of the race.

Gasly and Giovinazzi finally made their?way passed Evans as?the Kiwi had to concede fourth position to?the faster Prema drivers. Malja was the next to go after locking up?into turn nine and running wide, allowing the Prema pair through for third and fourth positions.

Despite coming under heavy pressure in the final few laps, Ghiotto was able to hold off Marciello to the line to take his first GP2 win of his career. Likewise, Gasly was able to hold his championship rival Giovinazzi to take the final podium position. Malja finished in?fifth position to take his eighth points finish in a row. Evans held off the late charging Matsushita in sixth position, with Rowland dropping down?to eighth by the chequered flag.

After retiring with gearbox issues, Sergey Sirotkin is now out of the running in the championship, meaning that Giovinazzi, Gasly and Marciello will go into the final round as potential?champions.