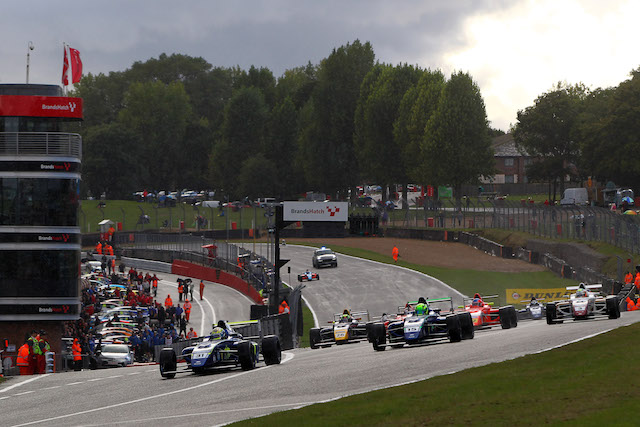 Five points behind Fielding coming into the Brands Hatch weekend, Fewtrell claimed a crucial double pole in qualifying, but lost out to Carlin team-mate Pull in the opening corners of race one on a drying track.

A safety car eliminated Pull’s?early lead but he quickly moved over two seconds clear on his way to victory.

But once Fielding got by the Brazilian, he quickly cut the 2.5s gap and passed Fewtrell down the inside of Paddock Hill on the final lap.

That increases Fielding’s lead to eight?points, but he starts sixth for both?remaining races with Fewtrell fifth and first.

Jamie Caroline?had to serve a 10-second penalty at the start of the race after a technical infringement that saw him stripped of pole, but came through to eighth in front of?Alex Quinn?and Red Bull Junior?Luis Leeds, who was third early on before his car slowed.

He does remain in mathematical title contention, now 38 points behind Fielding. Pull’s win was not enough to keep his hopes alive, with Quinn and first-lap retiree?Devlin DeFrancesco also ruled out.