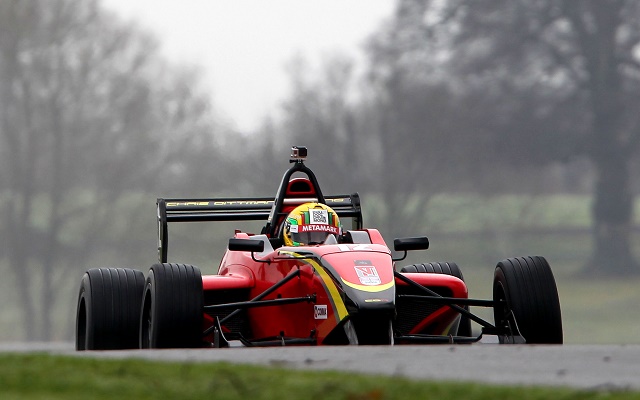 Douglas Motorsport’s Akhil Rabindra lined up on pole after inheriting the ever-crucial eighth place in yesterday’s race, but it was Jordan Albert who jumped into the lead at the start.

By the end of lap one, the Sean Walkinshaw Racing driver would lead Rabindra by a second and a half, the Indian coming under pressure from Ciaran Haggerty.

The Scotsman worked his way around Rabindra on lap two and then made impressively quick work of Albert’s lead, passing him around the outside of T1 on lap four.

Behind them, Lanan Racing’s Rodrigo Fonseca soon overtook Rabindra and started to close on the leading duo.

With two minutes left on the clock, the Mexican was up into second, clearing Albert for the lead at Brundle.

And on the very same lap, he was into the lead past Haggerty.

However, with just one lap to go, yet another challenger for the lead popped up – Jackson, who gambled on slicks and ran superb lap times in these conditions and? was just a second and a half off at the line.

He cleared a dropping Haggerty and then dealt with Fonseca in the final sector to secure a stunning win – Chris Dittmann Racing’s second of the weekend.

Fonseca would settle for second, just narrowly keeping a charging Jack Bartholomew at bay, albeit his teammate had little reason to be upset, having claimed a maiden podium from penultimate on the grid.

Haggerty and Albert completed the top five, ahead of Chris Mealin and yesterday’s winner Omar Ismail.

A troubled race for usual frontrunners HHC saw Harri Newey, Sisa Ngebulana and points leader Will Palmer all end up outside of the top ten, the latter having to pit midway through the race.

Due to track conditions, however, Newey’s fastest lap from race one is more than sufficient to ensure his race three pole.