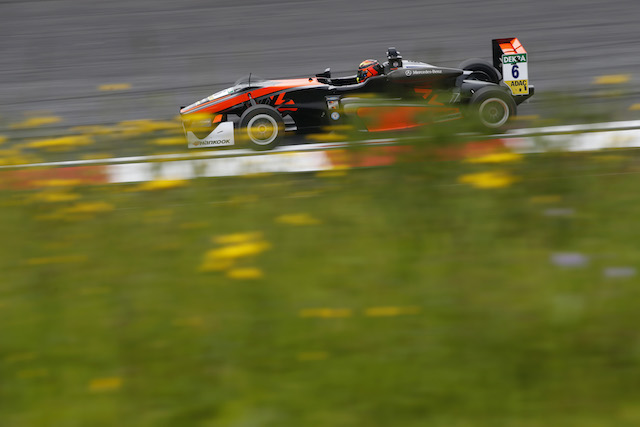 Callum Ilott scored his second win of the FIA Formula 3 European Championship season in the first race at Spielberg, which ended early after a huge three-car crash.

The incident unfolded when?Ryan Tveter?spun through the gravel at Wurth and came to a halt?on the racing line in a cloud of his own dust.

Carlin team-mate?Li Zhi Cong was unsighted and ploughed directly into the rear of Tveter’s car. That launched the Chinese driver’s car corkscrewing through the air and landing heavily in the gravel.?Pedro Piquet also tagged Tveter as he tried to make his way through the carnage.

Li received medical attention on the scene but is described as being “awake and alert” while Tveter has “minor injuries” after limping away from his wreckage. Piquet appeared to be unharmed.

With only around five minutes left on the clock, the race was ended early with Ilott the winner after he led from a pole position handed to him when?Maximilian Gunther lost his best time for a track limits offence.

The safety car was required on the first lap for a collision involving Tveter,?Arjun Maini and?debutant?Weiron Tan, and Ilott pulled away after the restart as Gunther was passed for second by Prema team-mate?Lance Stroll. Ilott’s winning margin was over three seconds once the result was declared.

Gunther had also been passed by?Mikkel Jensen, but managed to beat his former ADAC Formel Masters rival to third.

Piquet had been enjoying his best European F3 race to-date in fifth until he was penalised for a jump start. That promoted a battle between?George Russell?and?Nick Cassidy to one for fifth, which the Brit eventually came out on top of.

David Beckmann was the top rookie after a strong run to seventh in his second weekend in F3, just ahead of?Harrison Newey and?Ralf Aron.

Ben Barnicoat was forced to pit after first-lap contact with?Joel Eriksson but fought his way back to 10th, gaining the final point when?Niko Kari was penalised for forcing him onto the grass as they battled with Pau Grand Prix winner?Alessio Lorandi.