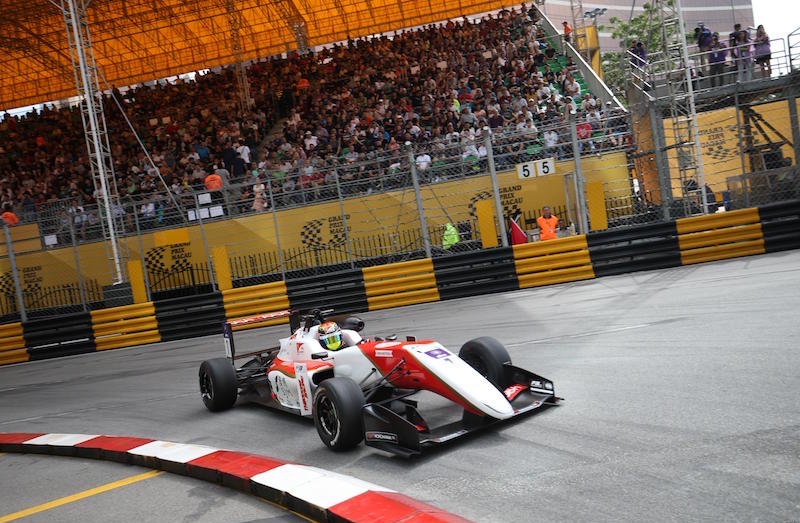 Callum Ilott made a stunning pass on Joel Eriksson to take an ultimately commanding win in the Macau Grand Prix qualification race for the Formula 3 World Cup.

Starting third on the grid, new Ferrari Driver Academy recruit Ilott moved up to second off the start behind pole-sitter Eriksson after Lando Norris got a slow getaway.

Eriksson led by around a second through the first three laps of the 10-lap race before being caught by Ilott, who came close to rear-ending the Swede at the Melco hairpin on lap five.

He remained on Eriksson’s tail onto the following lap, and chose to hold back until after the Mandarin right-hander before attempting a move.

That allowed Eriksson to cover the inside line and retain the lead when they went side-by-side under braking for Lisboa.

A lap later, Ilott changed his tactic and bravely dived to the inside of Eriksson just before Mandarin.

That enabled him to grab the inside line this time to make the lead his, and he opened up a gap of just under eight seconds in the remaining two-and-a-half laps.

The Formula 2 race winner started ninth after crashing at Fisherman’s in both qualifying sessions, but climbed to fifth by Lisboa on the opening lap and passed Ferdinand Habsburg a lap later.

While Eriksson was busy defending from Ilott at the start of lap six, Sette Camara took third away from Maximilian Gunther.

The Brazilian then twice challenged Eriksson into Lisboa on consecutive laps, but ultimately had to settle for third.

Habsburg struggled for speed early on, with Dan Ticktum coming past him on lap three before Mick Schumacher looked set to continue his impressive debut by getting alongside under breaking at Lisboa on lap four.

The Prema driver locked his brakes heavily however and was left with no option but to use the escape road.

That promoted the recovering Norris, who had dropped to ninth on the first lap.

Norris soon went on to pass Carlin team-mate Habsburg and then Ticktum, who set the fastest lap of the race on lap three but like Motopark colleague Eriksson lost pace afterwards and ended up eighth.

Norris was only one place in front after losing out to Habsburg and Pedro Piquet (who started 13th) in the final two laps, giving the European champion and mountain to climb if he is to contend for grand prix victory on Sunday.

All 21 starters finished on the lead lap in a remarkably clean race.

Double Japanese Formula 4 champion Ritomo Miyata spun at Lisboa early on but rejoined and finished half a second in front of Schumacher.

Devlin DeFrancesco was also delayed by an unseen incident, trailing home a further 14 seconds behind.