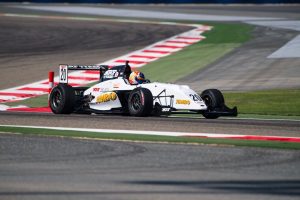 Rinus VeeKay dominated the third MRF Challenge race in Bahrain, lifting himself up into third in the standings in the process.

A strong start from pole prevented a challenge from fellow front-row man Felipe Drugovich, who then had no answer to VeeKay’s pace over the 10 lap race.

The Dutchman eventually crossed the line 7.784 seconds ahead of Drugovich, who extends his championship lead to 20 points.

Julien Falchero finished third, briefly making it past Drugovich late in the race, and continuously applying pressure to the Brazilian to finish just 0.046 seconds behind.

Alex Karkosik was a distant fourth, having started in third, ahead of Presley Martono and Dylan Young.

Manuel Maldonado had been part of the battle for fifth, before being handed a drive-through penalty for jumping the start, dropping him outside of the points.

A lap one spin involving Michelangelo Amendola and Robert Megennis dropped them to the back to the field, with both spending the rest of the race battling fiercely for position, eventually finishing 12th and 13th.