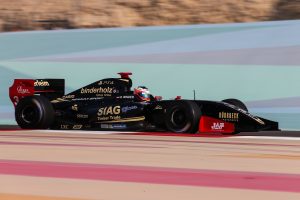 Lotus came into the final race level on points with SMP Racing by AVF, but a very poor start for Matevos Isaakyan and a spin for team-mate Konstantin Tereshchenko on the opening lap resulted in the title being effectively decided immediately in Lotus’s favour.

The Lotus pair rocketed away at the start of the race, with Fittipaldi attacking poleman Binder on the opening lap. Fittipaldi was the first to pit, but his attempt at the undercut strategy did not quite work out.

The two came out side-by-side when Binder pitted a lap later, and the Austrian driver was able to resist his Brazilian team-mate’s attacks once more.

From then on, Fittipaldi pushed Binder, but the two did not trade places, and they finished 2.5 seconds apart at the end of the 23 lap race.

The battle for third was between Diego Menchaca and Yu Kanamaru in the opening stages. However, both were awarded drive-through penalties for an incident at Turn 4.

Menchaca made the move on Kanamaru while the yellow flags were out for Tereshchenko?s spin, while Kanamaru forced his rival off the track in the process. This resulted in Sauber development driver Tatiana Calderon moving past both to secure a podium in just her second start, albeit a distant 15 seconds off of the lead battle.

Roy Nissany had to resist Henrique Chaves late on in a battle over fourth, ahead of the penalised Kanamaru and Menchaca.

Force India reserve driver Alfonso Celis Jr finished in eighth place, despite a clash with race one winner Chaves which left the Mexican with a broken front wing. He was also penalised 20 seconds for the incident, but still finished ahead of the delayed Isaakyan.

Nissany and Celis went into the race battling for second place in the standings, but with both having poor races it became a case of who could beat Celis to third. Binder and Nissany came close, both ending the season four points behind the Mexican, with Binder taking fourth on win countback.