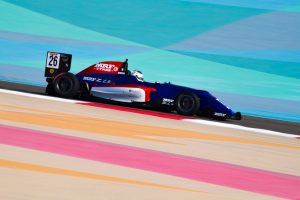 Julien Falchero won the final MRF Challenge race of the weekend in Bahrain, his second win in car racing.

At the start he immediately started attacking poleman Rinus VeeKay, but found himself being muscled out and briefly losing second place to championship leader Felipe Drugovich before the end of the lap.

The race was neutralised as the cars reached the second lap, after Dylan Young pitched Henning Enqvist into a roll at Turn 1, much like Pastor Maldonado did to Esteban Gutierrez in the 2014 Bahrain Grand Prix.

Racing continued on the fourth lap, with VeeKay losing his lead at Turn 1 after leaving the door open for Falchero to make a move. The Dutchman fought back at Turn 4, but GP3 driver Falchero had the inside line and kept the lead.

Falchero then put in a composed performance at the front, as VeeKay hounded him but never went for a move. A second safety car, this time for a clash between Michelangelo Amendola and Harri Jones, allowed VeeKay to get even closer, but late braking from Falchero meant the Frenchman kept the lead going into Turn 1, and ultimately, ensured victory.

Presley Martono, who had overtaken Drugovich for third prior to the safety car, almost made it past VeeKay at Turn 1, and kept alongside on the way up to Turn 4. VeeKay managed to make the outside line work though, and held second place to the flag.

Martono took third, his third podium of the weekend, and closed the points gap to Drugovich, who finished fourth.

Danial Frost beat Alex Karkosik to fifth, but the Singaporean was then disqualified for overtaking under the safety car.

Manuel Maldonado spent most of the race battling with Jones for seventh, and secured the position shortly before Amendola got involved with Jones, resulting in the second safety car. Frost’s disqualification meant that Maldonado moved up to sixth.

The next round of the championship takes place on 8-9 December at Dubai Autodrome, with Drugovich holding a 17-point margin over Martono, with a further two points covering Falchero and VeeKay.