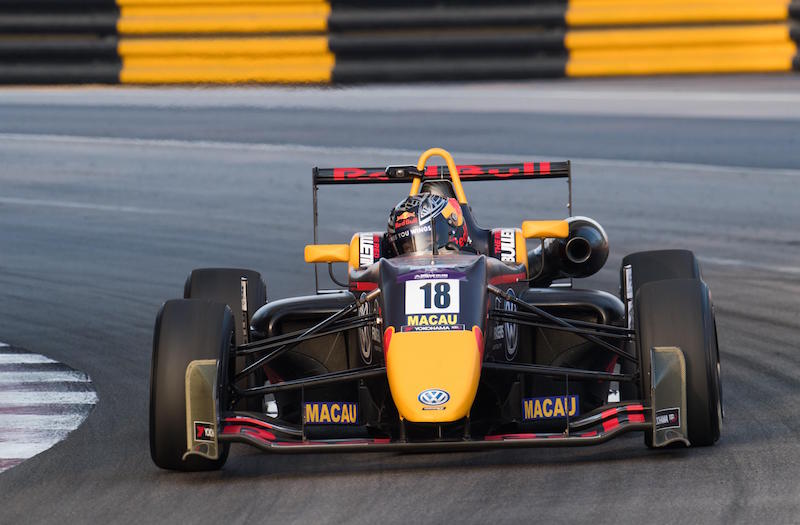 Dan Ticktum snatched an extraordinary Macau Grand Prix victory as Ferdinand Habsburg and Sergio Sette Camara crashed out in front of him at the final corner of the race.

Red Bull Junior Ticktum, in only his third event in Formula 3 and first for 12 months, had moved from fifth to third on the penultimate lap of 15 with a sensational double pass on Maximilian Gunther and Lando Norris under braking for Lisboa.

However, the Formula 2 race winner – who also led the race last year and crashed in both qualifying sessions before charging from ninth in the qualification race – suffered heavy rear tyre wear late on.

This meant he was caught on the penultimate lap by Ferdinand Habsburg, after the ever-improving Austrian had passed Maximilian Gunther on lap 11.

Habsburg was so much faster than Sette Camara moving onto the final lap that he outrageously tried to go around the outside of Mandarin, and only just kept his car out of the wall on the exit.

Sette Camara held on to the lead under braking on the inside, but unusually that didn’t mean the win was sealed, such was his lack of grip come the end of the lap.

He had to go defensive on the run between Fisherman’s Bend and the final corner, and Habsburg simply swept around his outside anyway to go into the corner first.

In his wake, Sette Camara went straight on and nosed into the tyre barriers, and Habsburg didn’t make it around the corner unscathed either, slapping the exit wall with his left-hand wheels.

Sette Camara’s Motopark team-mate Ticktum, who had started the race in eighth place but was among the leaders on pace all weekend, swept past to take the victory, half a second in front of Norris.

After a previously anonymous debut weekend with Van Amersfoort Racing, Ralf Aron came from 13th on the grid to take a remarkable podium finish, just pipping Habsburg’s damaged car to the line after swerving around his dislodged front wing. He had followed Ticktum and Norris past Gunther at San Francisco.

Qualification race winner Ilott, who was passed by the faster-starting Eriksson through the first corner of the race, pitted after the incident with the Swede when the FCY was withdrawn on the approach to Lisboa on lap three.

The Prema driver went down into the escape road while Eriksson stopped just before the tyre barrier, and the Swede’s car stopped on the climb out of San Francisco, causing another FCY that was later converted into a full safety car.

Ilott rejoined the race on the lead lap but pitted again with two laps to go.

The initial FCY had been caused by the damaged car of Eriksson’s team-mate Marino Sato on the run out of Melco.