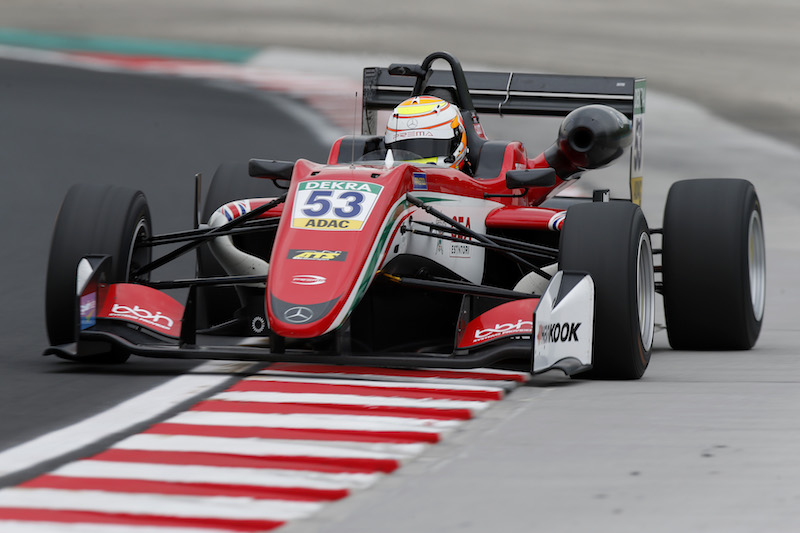 Callum Ilott came out on top in the second Formula 3 European Championship qualifying session at the Hungaroring, while?Joel Eriksson pipped him in an ultra-close fight for?race three pole.

Eriksson sat on top for much of the 20-minute session, before a wave of quick times from his rivals with around five minutes remaining.

Guan Yu Zhou was first to hit the top, but that was immediately followed by Lando Norris and then Ilott going even faster, with the Prema driver?achieving?a margin of 0.173 over his fellow Briton with what would a 1m34.890s turn out to be the best lap.

With race one winner Maximilian Gunther going fourth, Eriksson was relegated to fifth, but got back ahead of the German on his penultimate effort and then went second after the chequered flag, 0.006s faster than Norris.

Eriksson’s second best time, a 1m35.267s, was narrowly?good enough for him to claim race three pole.

Jake Hughes briefly beat Zhou into fourth place at the end of the session, only for his time to be deleted, leaving him fifth.

That was still ahead of Gunther, who will be sixth for both races as he defends the?19-point advantage in race one, when?Norris and Eriksson toiled to eighth and 10th.

In?his first round with Motopark, Beckmann matched team-mate Eriksson to the thousandth with five minutes remaining before the Swede’s late improvements.

Completing the top 10 were race?one stars Joey Mawson and Jehan Daruvala, as well as Nikita Mazepin.

Mazepin will start ahead of Daruvala in race three, behind fourth-row men Hughes and Mawson.