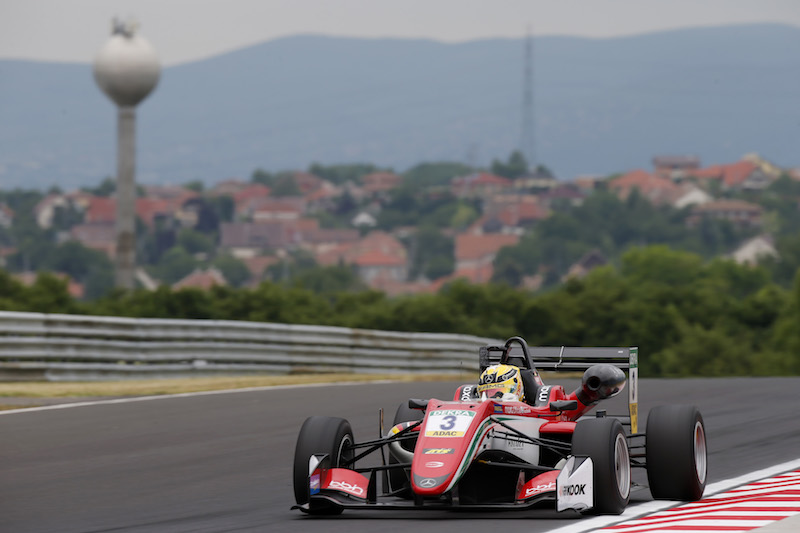 Maximilian Gunther took a comfortable win in the first Formula 3 European Championship race at the Hungaroring to move into a 19-point series lead.

The Mercedes-supported Prema driver made a great start from pole to lead clearly into Turn 1, and following?a brief safety car period he pulled a 1.5-second gap on the first lap after the restart.

From there, Gunther gradually increased his advantage, finishing 5.8s?clear for his third win in a row.

Jake Hughes, promoted to the front row of the grid by a grid penalty for Joey Mawson, didn’t make as good a start as Gunther and found himself in the middle of a three-wide scrap at Turn 1 with Callum Ilott on his inside and Jehan Daruvala on his outside.

The Hitech driver emerged with second place still intact and he held it until the end for his best result of the season.

Force India protege Daruvala pressured Hughes throughout on his way to his second podium for Carlin, a result that moves him to the head of the close fight for fifth in the standings.

Mawson, demoted on the grid for contact behind the safety car in the third race in Pau, passed Ilott for fourth around halfway through, getting alongside on the outside of Turn 1 and completing the move down the inside of Turn 2.

The Australian finished just six tenths behind his fellow rookie Daruvala, with Ilott dropping over two seconds back.

Harrison Newey and Guan Yu Zhou had a private duel over sixth, while Lando Norris came home in eighth.

The Carlin driver briefly fell to the bottom?of the top 10 on the first lap, but Ralf Aron and Pedro Piquet then collided just in front of him on the run to the chicane, sending the Estonian into the gravel trap and forcing the Brazilian to pit minus a rear wing.

Norris was passed in the subsequent turns by Mick Schumacher, who then kept him at bay for some time after the safety car.

The Briton did eventually get by with around 15 minutes remaining, and finished on Zhou’s tail.

He therefore falls to 19 points behind Gunther, but is three points ahead of Joel Eriksson, having been tied with the Swede for the series lead prior to the race.

Eriksson had to start from the back row after Motopark got its tyre pressures wrong in the wet qualifying session, but he did climb to 11th place on the first lap prior to the safety car.

For much of the race he was kept out of the points by his new team-mate David Beckmann, who was in search of his first score of the season, but eventually nipped past at Turn 1 with eight minutes left on the clock.

He then pressured Schumacher until the flag but had to settle for 10th.