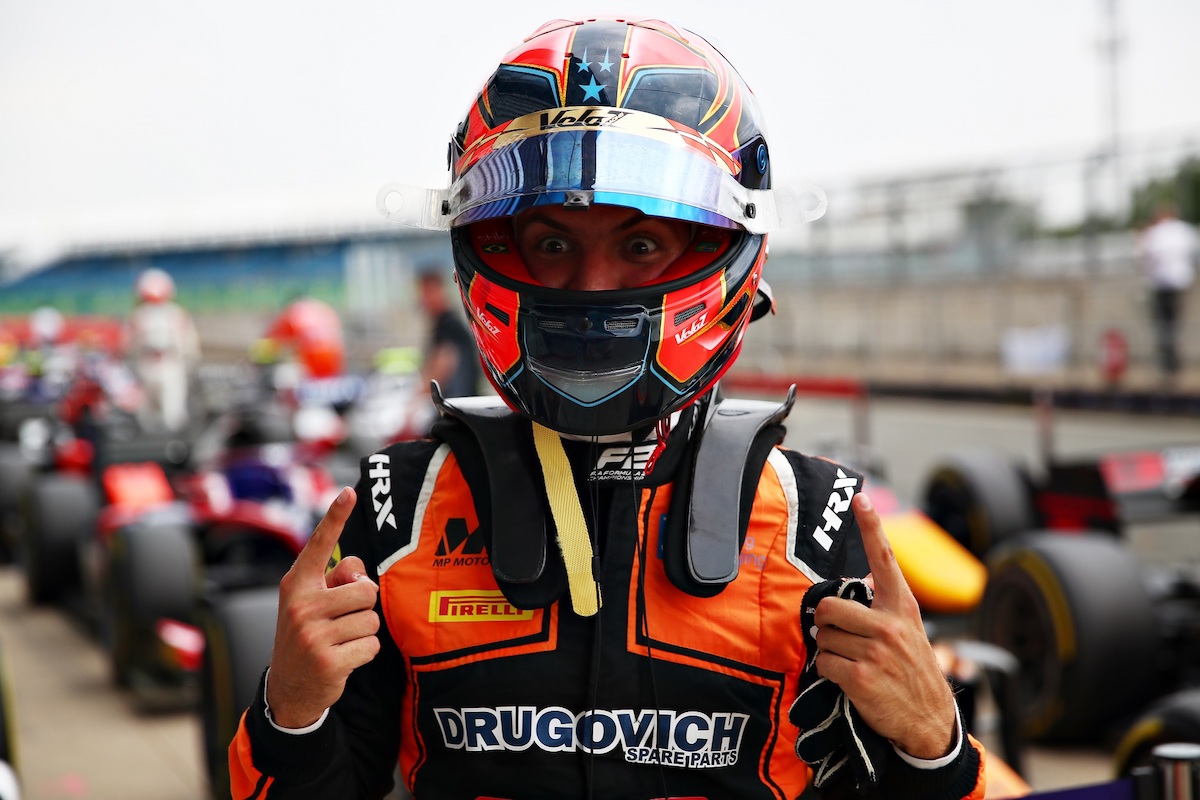 MP Motorsport’s Drugovich had previously qualified in second for the season-opening Red Bull Ring event – where he took the sprint race win – but struggled in the second round there as well as at the Hungaroring.

The 2018 Euroformula Open champion spoke of his emotions after taking his maiden pole at this level.

“I felt suddenly amazing,” he said in the press conference after qualifying. “It was an amazing lap for me, and the car was also pretty much perfect. We made big improvements for the second stint in quali, and everything felt amazing.

A quick second sector around the Silverstone lap – featuring the famed high-speed section through Maggotts and Becketts – was key to Drugovich’s pole time.

“Sector two is the biggest sector on this track. So I think I pretty much nailed that sector and the car felt really stable there. Especially on this track, if you get those corners right you get a lot of satisfaction, so after the lap, I was really happy with it and for sure it was a good lap.

“Of course, I didn’t improve on the second lap so I was waiting to see if someone else was going to improve but it was a really nice second sector. Fast corners, so I really had to commit to it and have confidence in the car and we pretty much had that.”

Despite his inexperience and struggles so far in feature races, Drugovich is aiming for his maiden feature race win tomorrow.

“Starting from pole of course you aim for the win. But we’ve run both tyres today so we really have to analyse what happened today and what direction the tyres are going as far as degradation – to find a good balance and see what I have to do to prevent tyre degradation tomorrow will be the main thing to look for.

“I didn’t really lose performance after [Austria], I just didn’t really put my laps together and the car was maybe a little difficult so that didn’t help. But we made some improvements. I improved my driving to what I had to do to put it together today and also the car was amazing as we analyse everything from the first weekends, so it came together today.

“We have built up a lot of experience, and in the other feature races that we had we didn’t maximise our performance or potential so as we’ve seen we have been a lot quicker in the sprint races but it’s the same car and same track.

“So I think our potential is pretty good, we just need to maximise strategy and everything but I’m still a rookie, everything is still new for me.

“Of course, it’s easy in qualifying to put a lap together then with the tyres and everything, it’s normal to struggle in F2 in the first year but I’ve been really happy until now and tomorrow hopefully we can put everything together.”